Old Maps of Westgate and Chichester 1

Since the launch of the website we have sought to develop our historical archive. Here is a collection of old maps upon which figures Westgate and its surrounding streets in one form or another. 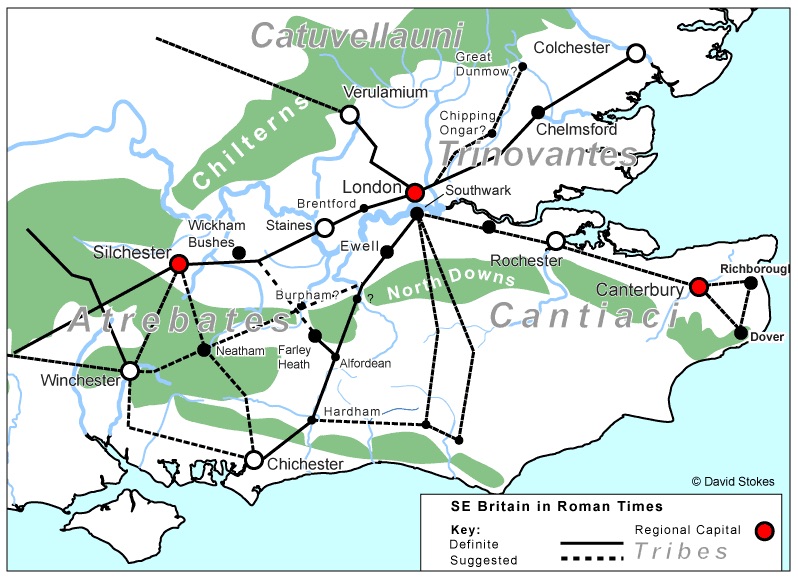 2007 – I know, we are starting with a recent map, but there are no printed Roman maps in existence of course. This one shows the complex of Roman roads and the place of Chichester in the southern English network. The dotted line running from Chichester to Bitterne in the West and then onto Winchester departs at Westgate. This is only a suggestion however, as the Western road has remained stubbornly undiscoverable even though we all know that it is out there somewhere! It was not a main road either. Although Winchester was to become Alfred’s capital, the Roman roads ran to their regional capitals; one to Silchester out of Northgate to another to London out of Eastgate. A direct road to Winchester has recently been confirmed and is not marked on this map. 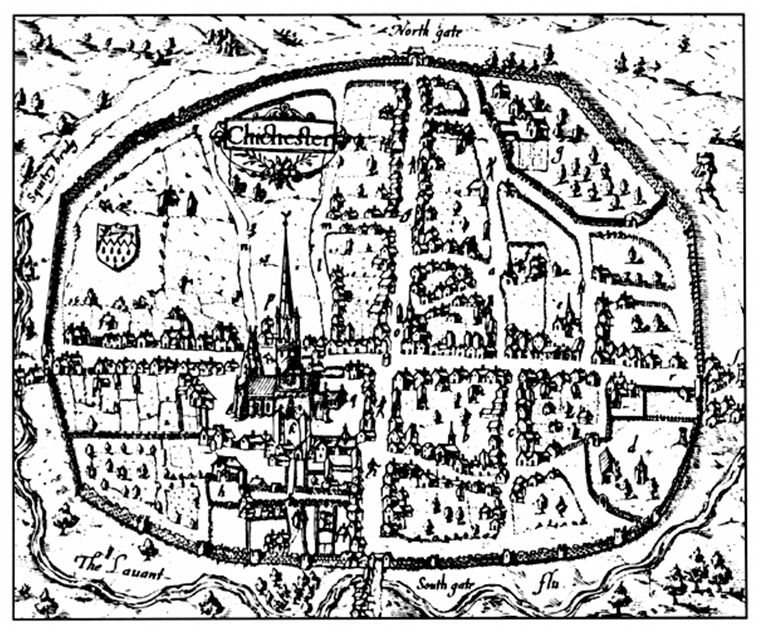 1595 – The oldest representation of the city by Norden. The western and eastern suburbs of Westgate St Bartholomew’s and St Pancras are marked, and the river has not yet been re-routed. 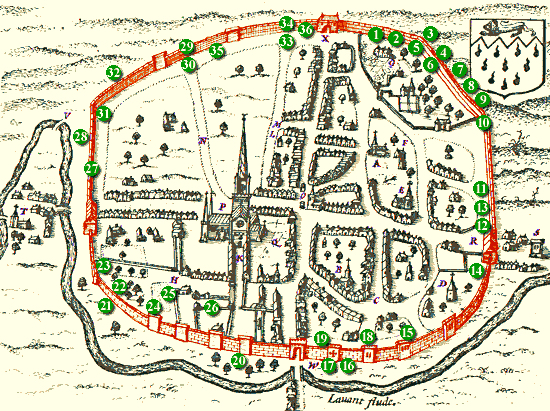 1610 – The next earliest available representation of the City shows the suburb of St Bartholomew “without the walls” to the left. A representation rather than a street plan or map of the buildings, the church of St Sepulchre’s was still standing but circular. Here it is shown as a generic “this is a church” period icon. The river still runs round the walls before turning back to the sea via the Brewery, the Slaughterhouse and the Tannery – a carefully ordered sequence of dirty industries! Drawn by John Speed. The red walls and green numbers are a 20th Century edition to show the Walls Walk on the chichesterweb website, from where this image was taken. 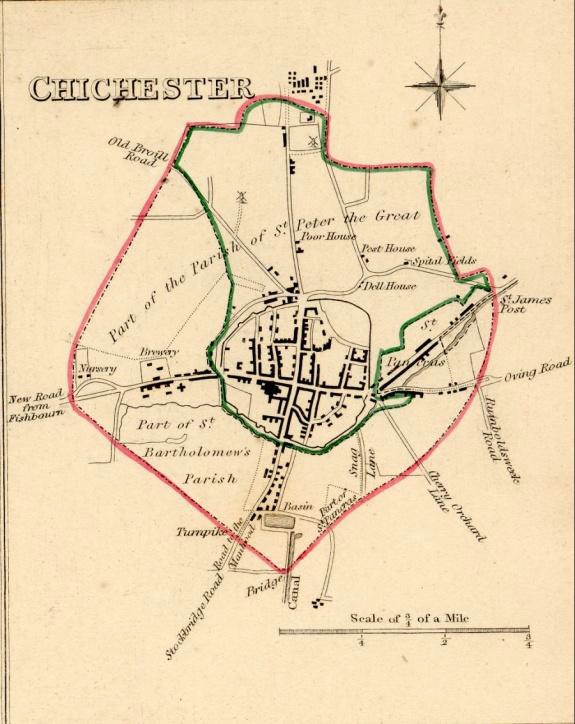 1751 – Chichester’s boundary. The Brewery is clearly shown and there seems to be a detour leading to a nursery further along upon which the Parklands Estate was to be built in the 1930s. The magnificent flint nursery wall is still standing on the north side of our street. The river is now running to the south of Westgate. The northern stream was kept to feed the brewery but is not shown. 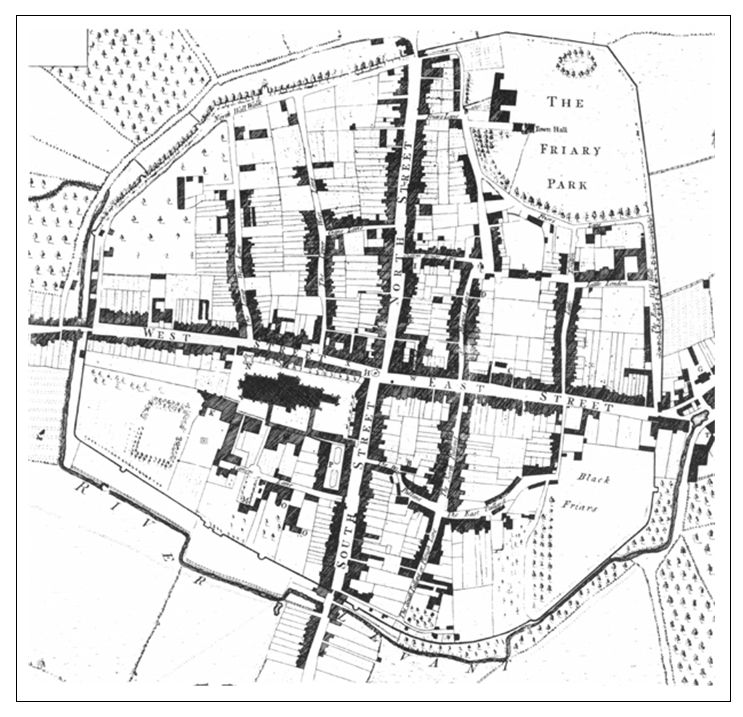 1769 – Chichester as it was at the height of the Georgian period, early in the reign of George III. He had fifty more years to go and the City is getting more built up. The northern spur of the river is shown here with the Squittery Bridge crossing by Orchard Street where the Westgate cannon was found in the mud. 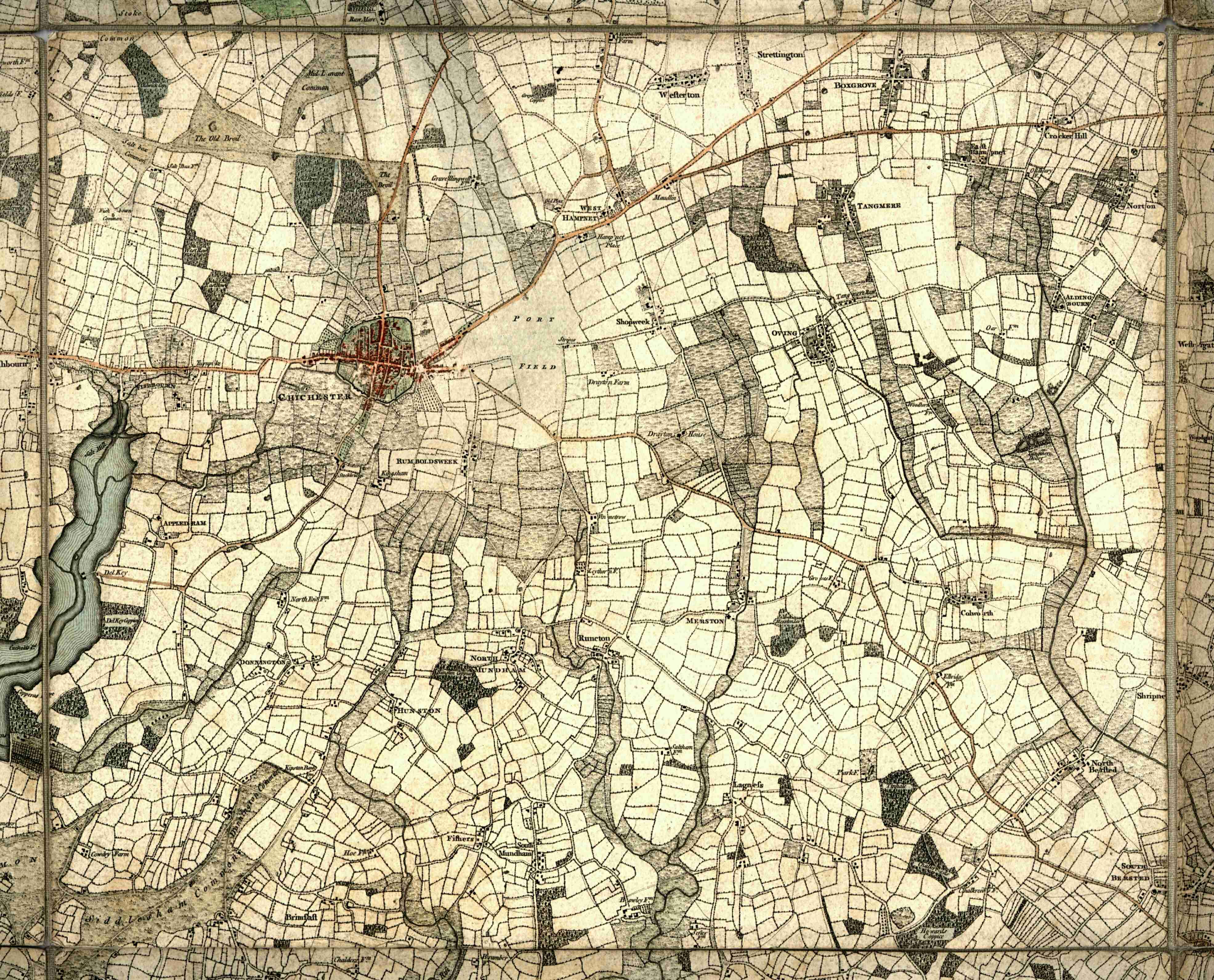 1787 – The wider Chichester area as drawn by Yeakell and Gardener. Part of their wider Sussex map. This clearly places the Georgian City in its rural and waterside context. 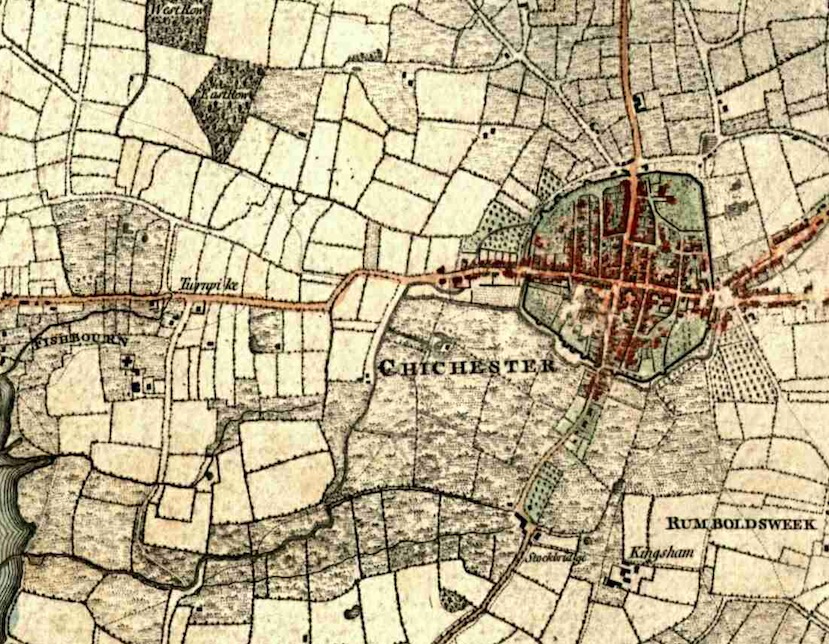 1787 – Detail of Westgate taken from the above Yeadell and Gardner map. The kink in the road by Westfield House is still there and would not be smoothed out until the railway came. The turnpike (toll road) started at Fishbourne at the top of Apuldram Lane and not at the West Gate as some will assert. The Indian restaurant is not a tollgate but the outhouses of the White Horse inn that stood to the west of it until the construction of the Avenue de Chartres ring road led to its demolition. 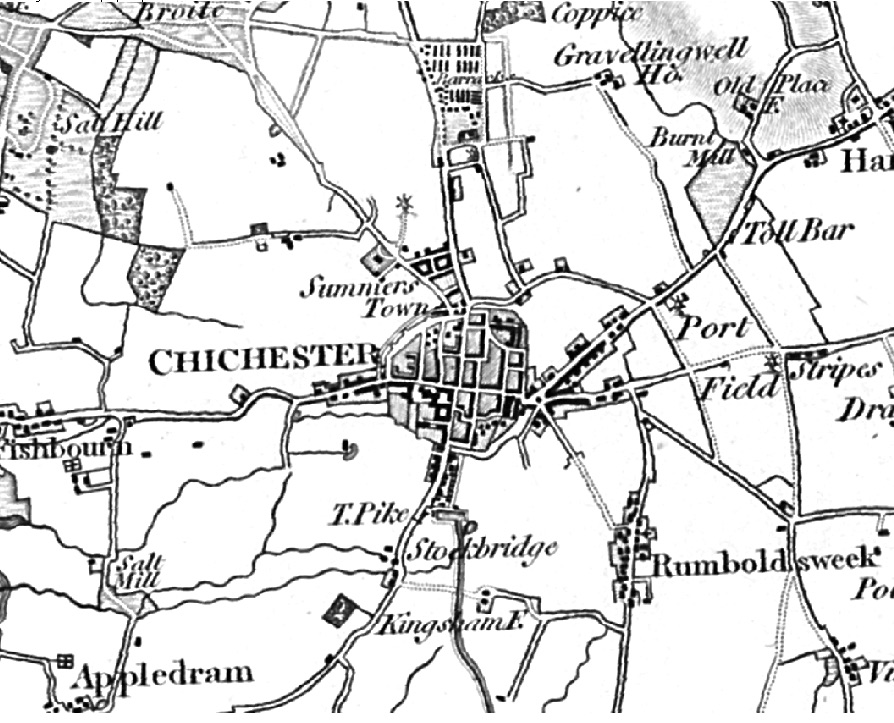 1813 – The Chichester area. Westfield House, no 80 Westgate, is clearly shown but most of the buildings shown are nominal- “here is a building but it does not necessarily look like this”! Summerstown is being built and the barracks are well in place. For once there is no church shown at St Bartholomew’s, which was true. Demolished in 1640s it was not to be rebuilt until the 1830s, although the parish remained throughout the period collecting the money…

Chris Wood of Orchard Grove writes in to say that Ellerslie House is visible which was built in 1810. Parchment Street was also laid out and the first houses built in 1810. The three streets in the part of Somerstown east of St Paul’s Road were developed from 1812 onwards. The map is clearly before 1823 when Cavendish Street was laid out. He thinks it is later than the Loader map of 1812. [Thank you Chris! Ed.] 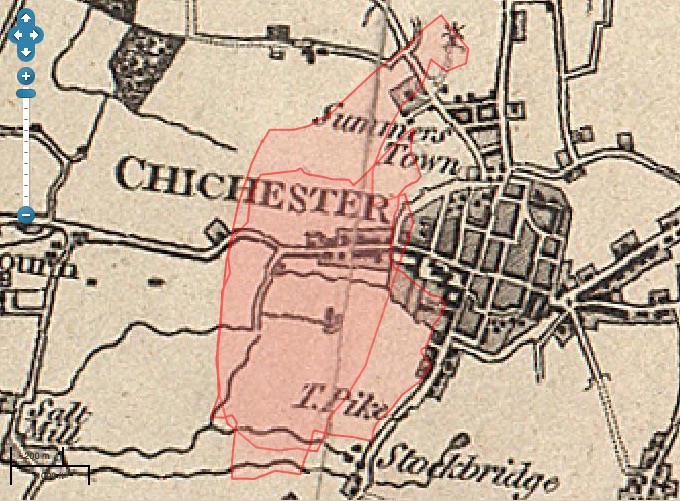 The same map but showing the boundary of the parish of St Bartholomew in 1801, integrated into the parish of St Paul – hence the overlapping red areas – as the church had not yet been rebuilt after the demolition by the Parliamentarian army in the 1640s. 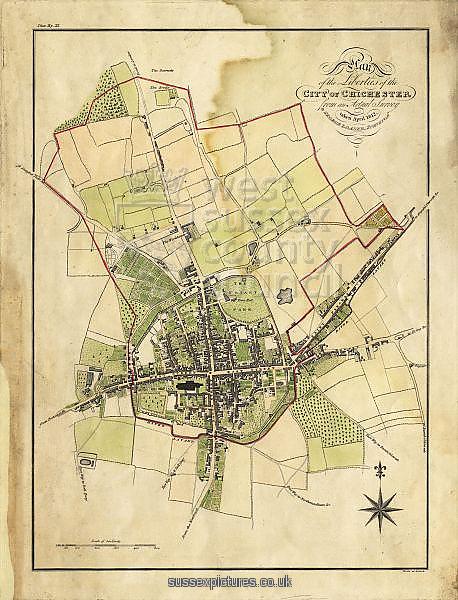 1812 – A very poor image unfortunately but this Map does include our area outside of the city walls. The river is shown running in its current course and the Brewery has grown into quite a complex. This is a plan of the liberties of the City of Chichester from an actual survey taken in April 1812 by George Loader, Surveyor. (Image WSCC) 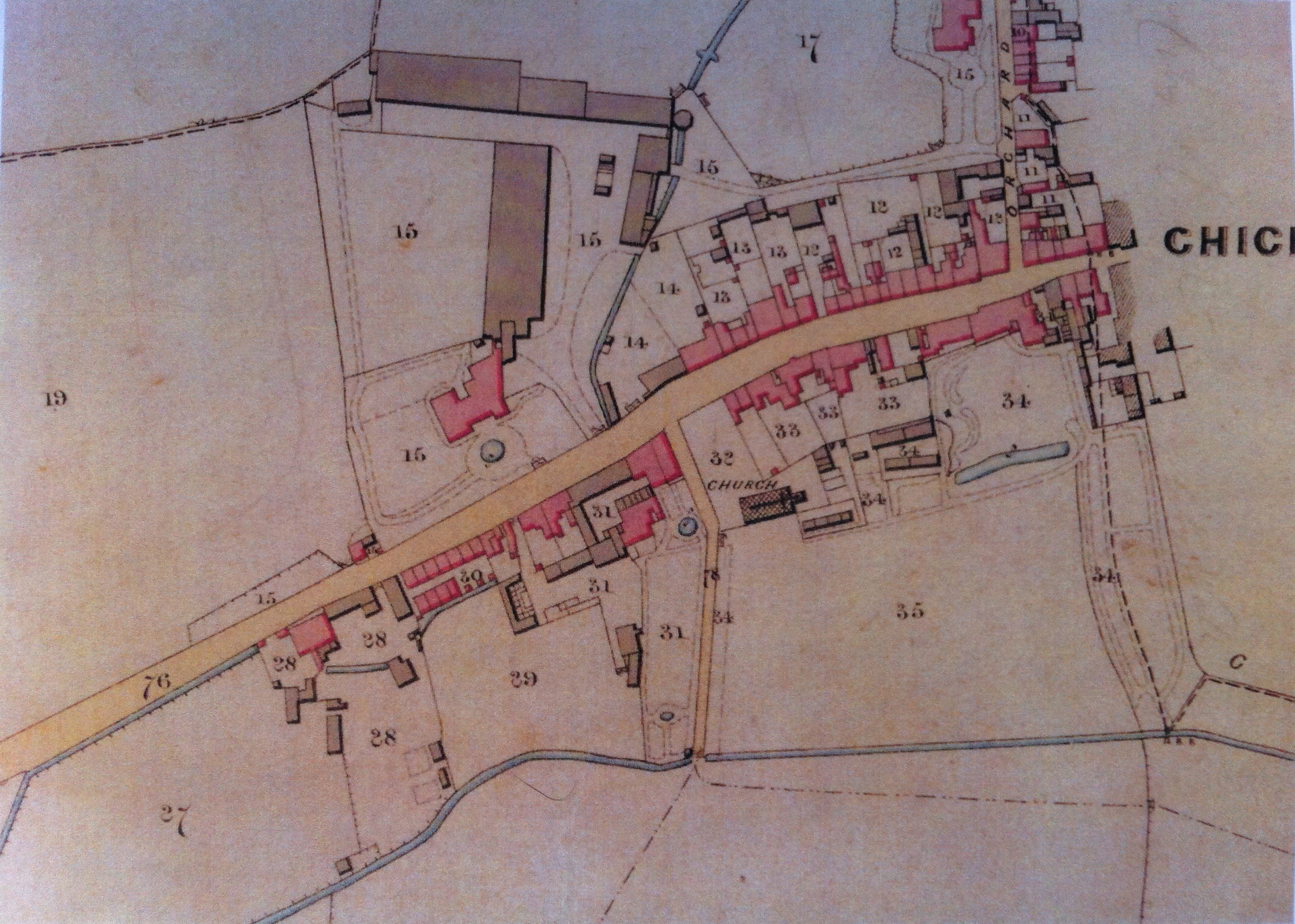 1841 – A close-up of old Westgate taken from the St Bartholomew tithe map. The new church has been built. For once the old northern branch of the river that fed the industries is shown, so not yet put inside the culvert. 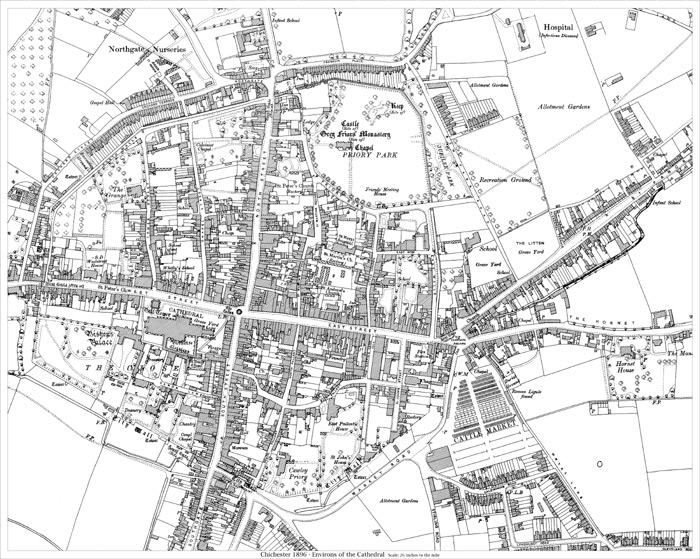 1896 – The Chichester Town Map. Much more space is given to the Eastern suburb than to ours in the West. Our final map in this series.

If you want to see more from this collection, type “Map” into the search field top right of this screen. 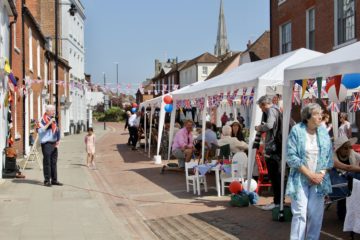