The History of 27-39 Westgate, aka Shippam’s

For those of you interested in learning about individual properties on Westgate, last April we began to post details of the buildings at the conservation end of the Westgate which can be found from various sources. In these articles you can find a list of the properties protected by Historic England listing, details of the renumbering of the street as some records still record the old number, and research on the shape of the street by a resident.

To further flesh out this catalogue, we are now turning our attention to any details about individual properties that may be available. We start with number 3 Westgate, in the Georgian Priory complex at the top of the street. The early part of this article is an from The Building of Georgian Chichester by local historian Alan Green (Phillimore 2007) and is here reproduced with his permission. This should be read in conjunction with the above articles to get a complete view of this property.

To the west of St Bartholomew’s churchyard is a short lane (now Mount Lane) leading to Westgate Fields, beyond which further development of Westgate took place in the second half of the 18th century. The terrace now numbered 27 to 39 (odds) has had a most complicated history. The pair of three-bay houses, Nos. 37 and 39, at the west end are shown on Gardner’s plan [of 1769], but in the gap between them and St Bartholomew’s it shows only a narrow building at an angle to the road. By 1812 the gap had been filled completely but Loader shows it occupied by a block constituting of two large buildings and not the five houses (27-35 odds) that now exist. Little can be deduced from the fronts as they have been altered so much but high up on a rubblestone wall on the rear of what is now No. 33, is a stone bearing the date of 1789 under the initials ‘JW’*.

A plan of the Westgate Brewery and its environs made for Messrs Henty in 1846 indicates the whole of the range of Nos. 27-35 occupied by one building block, which it designates as being ‘Shippams House and Stores’. 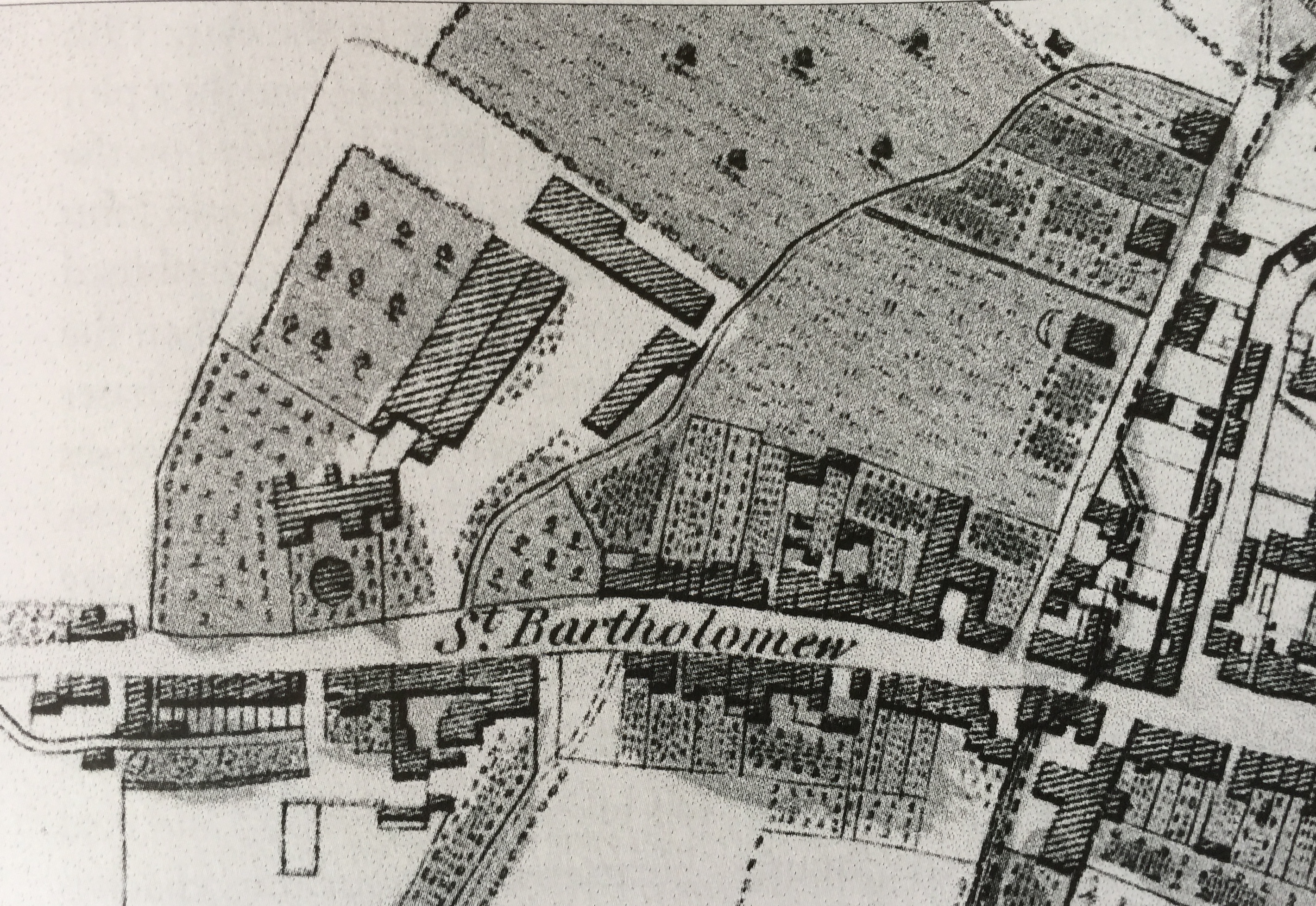 Charles Shippam opened a provision shop in Westgate in 1786 which he ran until his death in 1817, and successive generations of the family continued the business, eventually turning it into the renowned manufactory of sausages and meat pastes in East Walls.

The current residents of this stretch of houses know that Shippam’s meat paste factory was situated in these buildings before it grew so big as to have to move intra muros into East Street. It is known that No. 37 was the shop from whose front rooms Shippams sold their meat paste jars from 1786 and rumour has it that No. 27 was the Shippam residence with its still-magnificent double-sized rear garden complete with tree of heaven, No. 29 having a mere courtyard. (This is the same scenario as no. 17 endures next to no. 19 and is another example of what Alan Green calls the ‘flow’ between property boundaries on Westgate.)

Nos. 31 to 35 were the Shippam warehouse.You will note that No. 33, the middle property of the three, has a taller window on the top storey set into the roofline, built for access to the store with a hoist (see top photo); and a door still exists inside No. 37 from a rear flag-stoned room, which was the entrance from the shop into the warehouse at what is now No. 35.

It is also thought that the southern boundary wall to Nos. 37 and 39, and integrated since into No.1 St Bartholomew Close, was the wall of the Shippam slaughterhouse. This was flushed through by the River Lavant, after clean water had been taken from upstream across the road for the beer-making process. The Tannery also benefitted from this arrangement, but the whole area must have smelt very strong and the harbour water at Fishbourne polluted.

*The current owner of No. 33 asserts that the carved stone referred to, because of its odd siting high up at the rear, may well be just a ‘found’ piece of stone and not necessarily original to this building.

I have just discovered your wonderful site and your article about shippam .
My gr gr gr grandfather George sims (born 1800 in Chichester ) was a tanner for shippams in their tannery.
He lived in the westgate .I believe at no 46 and later no 24 ,perhaps they moved because they had 5 children including my gr gr granddad .We believe he kept his ‘tanning trolley ‘
in a cut way down the side of the house?
All their children were baptised in st Bartholomew church and I understand George is buried there as he died in 1867 aged just 67 . I have recently sent off for his death certificate,but would think being a tanner contributed to his early death .I am told urine was used widely in the tanning process ! I would love to know if his grave exists.. is their anyway I can find out ?
His son William was a milkman in westgate in 1861 and his wife a chairwoman .
I hope this has been of interest and look forward to hearing any feed back especially about George’s grave .
Kind regards
Sandie lyons

Hi Sandie, I have just come across your post and am really excited as George Sims was also my gr gr gr grandad aswell!! We are in the process of researching our family tree and have got back as far as George and Mary and now stuck!! We also have his death certificate and further to that we found a newspaper article on how he died, an awful industrial accident at the Tannery!! My gr gr granddad was George (junior), Williams brother!! Is there any way of contacting you so we could put our information together?? Regards Linda Wooldridge

Hi Sandie I have been doing my family tree ,and my aunt Annie Elizabeth Talbot, born 1898-1918 was married to Albert H Shippam 1900! My mother told me she was married to Shippam of Chichester,she died at the age of 21 and buried at Arundel, do you know? About if anything of this side of family,I do have a picture of her,but not Albert,I do believe he remarried,has he was only 17 when he married Annie maybe he had to marry her because she was pregnant ?they were only married 3 months before she died
Kind regards Percy