Article adapted from one originally researched and compiled by Paula Chatfield of Parklands RA for her excellent Easter Trail series and re-published here by permission.

Before the railway arrived (see 1813 map below), the Westgate/Fishbourne Road was the main road (for foot and horse traffic) between Chichester and Portsmouth. 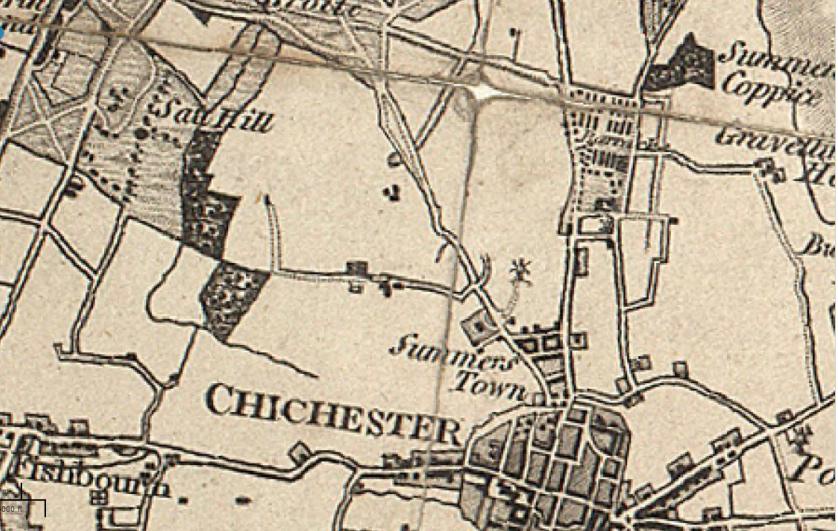 In 1846/7 a level crossing opened here, as the railways reached Chichester: first from Brighton, then from Portsmouth. 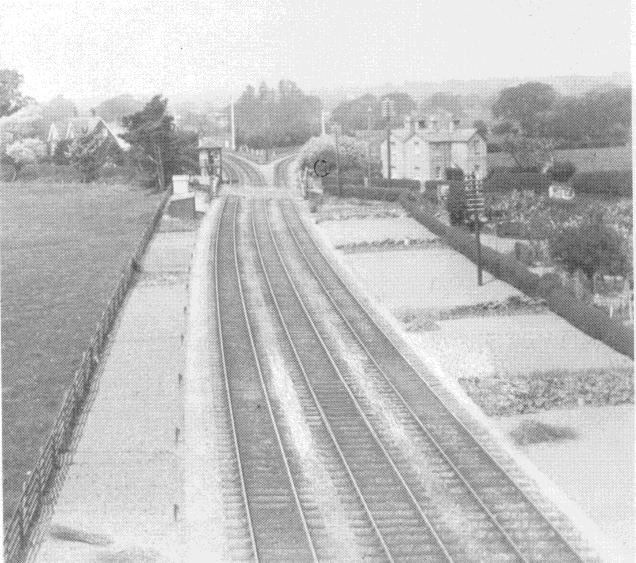 In 1864 an Act of Parliament authorised construction of the Chichester to Midhurst railway, but this section did not start until 1879, after its proposed junction with the mainline was moved to “a point 20 yards west of the Chichester to Portsmouth public highway, thereby eliminating any further inconvenience to that busy road”.

Believe it or not, the previous design would have taken the railway through what is now Parklands and required Westgate to be raised to cross the new line by a bridge – as well as caused considerable inconvenience to the mayor, Mr George Henty. You can clearly see the line to Midhurst branching off to the north in the above photograph. Centurion Way follows the line of this now disused track. 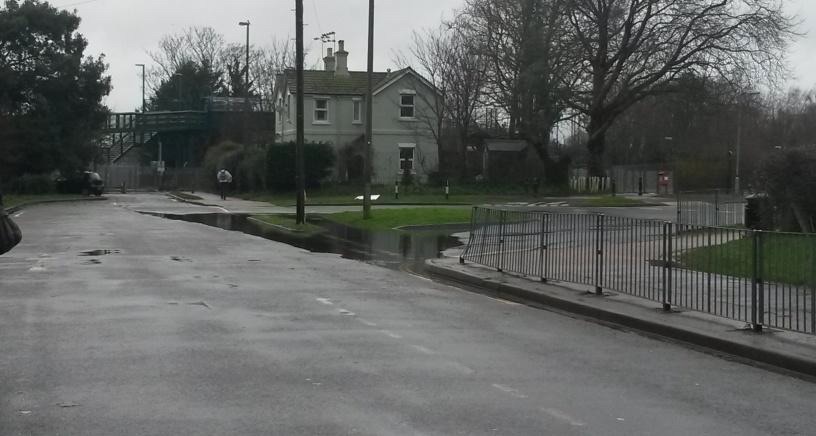 In 1983, another Act of Parliament authorised construction of Cathedral Way and diversion of what is now Fishbourne Road East, creating a foot and cycle level crossing. Note that the rail-side building still stands some 120 years later, though it has lost a few chimney stacks. The line of hedging seems to have survived also. 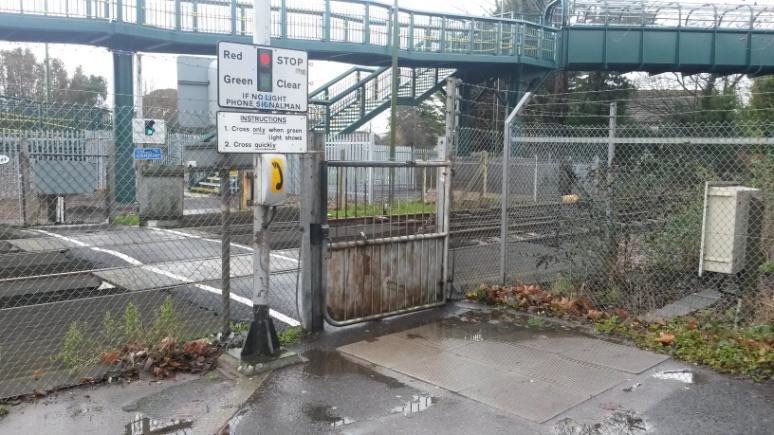 In 2013, Network Rail built a bridge intended to replace the by-now pedestrianised level crossing. They were able to use land on the Parklands/Centurion Way side where the Chichester to Midhurst railway once connected with the main line. Here’s a photograph taken on a rainy day where you can still see the controls and gates to the old pedestrian crossing (as it had now become) with the newly completed footbridge in the background.

On a completely different note… 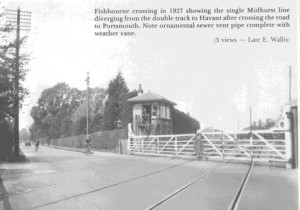 Did you notice in the corner of the post card that heads up this article, the reference to the ornate sewer pipe which can be seen to the left of the crossing?

Here is a close up of one in the same system: 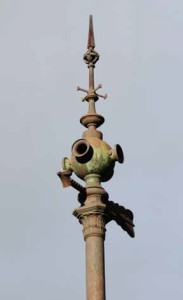 This is a photograph of the last remaining example of this type of sewerage vent pipe to be found locally. It was recently listed by Historic England as part of our industrial heritage and is located close to Chichester’s listed signal box to the west of the station at the far side of Westgate Fields. There must have been several of the same model along this line.

The pipe may easily be seen from the access road to the Waitrose car park whose entrance is off the roundabout opposite the Westgate Sports Centre.

The pipe was listed in July 20-14 for the following reasons:

The sewer vent pipe adjacent to Chichester Signal Box, probably manufactured by MacFarlane & Co. of Glasgow and erected between 1892 and 1894 as part of Chichester Corporation’s sewerage systems, is listed for the following principal reasons: * Design quality: a particularly elaborate design; * Rarity: a unique survival in Chichester, six examples of this design are listed in the country; * Intactness: intact apart from the crown on the finial; * Comparability: more intact than some already listed examples of the design. * Group value: adjoins a listed signal box.

The Council’s Drainage Committee prepared a scheme in 1894 for ventilating the new sewers but the document has been lost, so that the precise location of all the original vent pipes or their makers is not known. Although no foundry marks are shown on it, sewer vent pipes of an identical pattern were manufactured out of cast iron by MacFarlane & Co. of Glasgow. This “stink pipe”, as they were known, is approximately nine metres high comprising two cylindrical columns of two conjoined lengths of pipe. The lower has a moulded plinth and is linked to the upper with a flanged joint. The upper has a moulded capital beneath a possibly fixed arrow wind vane, a spherical head with ball fitting with four circular vents and an ornate finial. The finial would originally have incorporated a crown.

The sewer vent pipe does not appear on 25 inch scale Ordnance Survey maps from 1896 onwards but the Land Registry entry mentions a Conveyance of 1951 which refers to a sewer running through and under the property and a manhole, which are subject to the rights of the Corporation of the City of Chichester.

We are always looking for more contributions like this, so if you would like to send in an article and/or photographs or video about something relevant to the residents of Westgate and its side streets, then please let us know. Thank you.

[…] Only in in 1983, did an Act of Parliament authorise construction of Cathedral Way and the diversion of what is now Fishbourne Road East. At the same time the Westgate railway level crossing was closed to motor traffic an it became a crossing for pedestrians and cyclists only. […]

FoCW recommend you write in opposition to Sherborne-Rd/Westgate pavements being converted into shared use cycle tracks – Friends of Centurion Way · 22nd July 2021 at 12:48 pm