Re-planting of the Westgate Planters

The general state of the public realm in Chichester has suffered from a lack of investment in recent years and the City Council has begun work in the City Centre and with communities to renovate and maintain the various installations on our streets. Citizens will have noticed recent improvements to the City’s roundabouts and benches for example.

On the 20th May 2017, residents cannot have helped but notice a green transformation taking place along the length of Westgate, as our community rolled up its sleeves and set about renovating the plants in the street’s 14 planting beds. These were put in as part of traffic calming measures following the construction of the Tesco super store in 1993, but had fallen into a state of disrepair with neglected plants becoming pot-bound and rather sad. 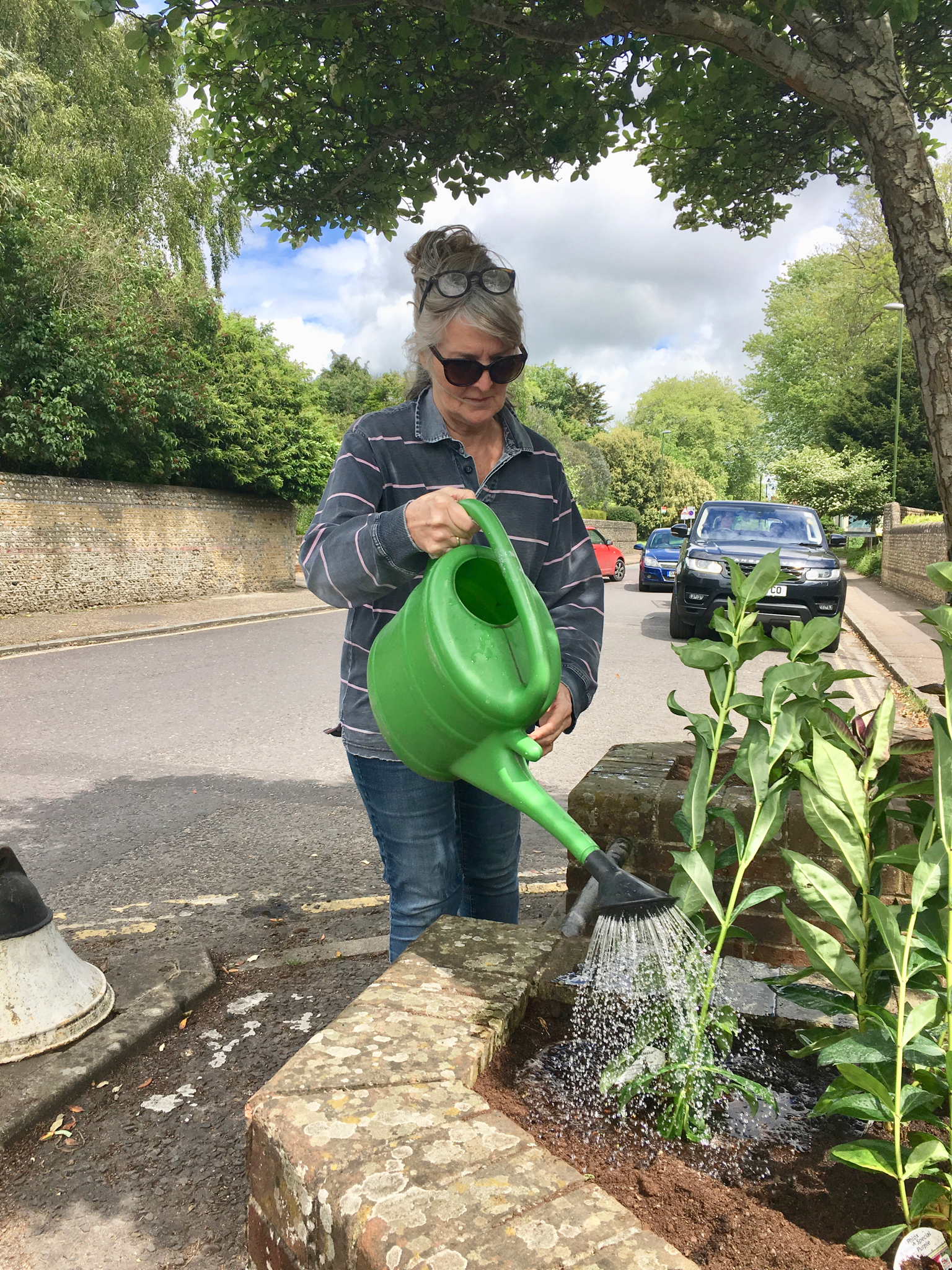 Some 20 volunteers came forward, headed up by Westgate resident Penny Tomlinson, who called in John Garrigan the gardener at Sennicotts to provide professional horticultural advice, and workers from Peter Young’s company, Graffiti Solutions Ltd, to help with the heavy work of clearing out the beds ready for planting.

Backed by the City Council

The City Council was also an enthusiastic supporter of the Westgate initiative from the start, initiated by the Westgate Residents’ Association last year to renovate the planters and flowerbeds along this important local street, part of which makes an important contribution to the glories of the Chichester Conservation Area as we know. 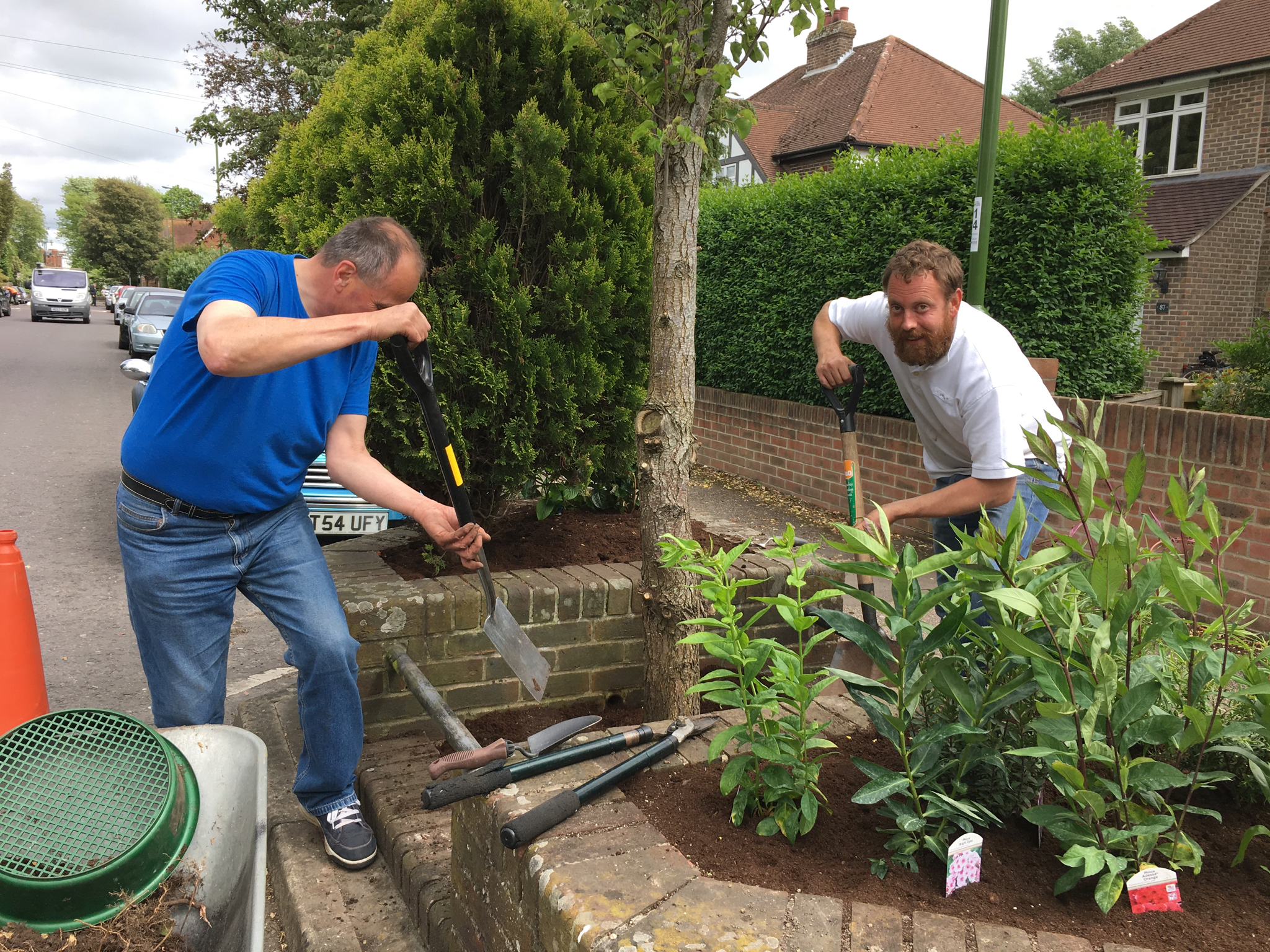 A licence to invest community resources in the improvement of the planting beds on Westgate was kindly negotiated by the City Council with the County Council, who manage the highways. In addition, a generous grant in excess of £3000, for materials and labour, was provided from community funds to help the Residents’ Association carry out the necessary works.

Thanks to Peter Young’s offer of his workmen who worked on in pouring rain, the planters were emptied during the week preceding the 20th May and freed from all potbound shrubs and weeds. Very little decent soil was left but this was remedied on the Saturday when the volunteers put the compost in. 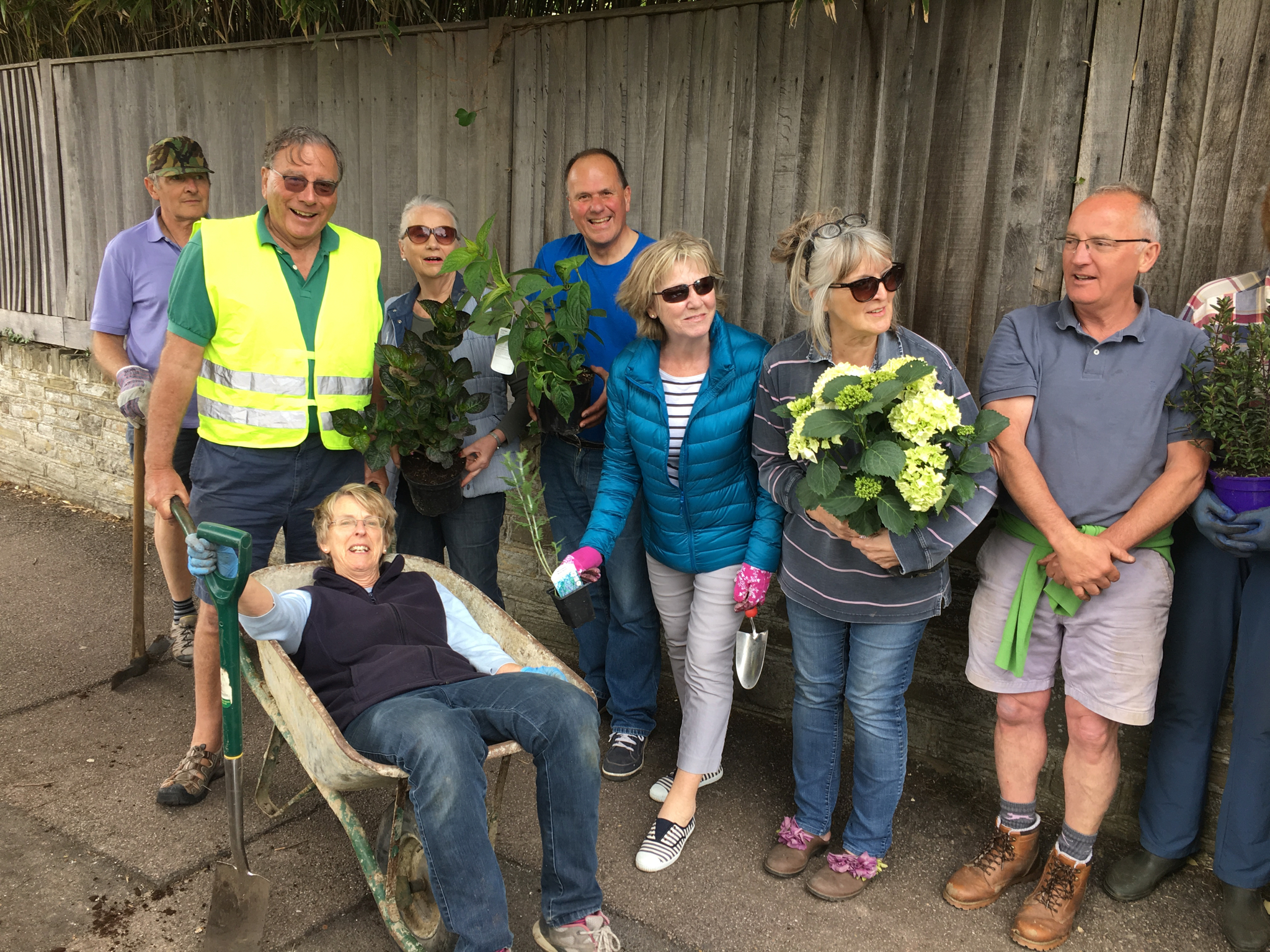 We have to thank a very happy band of 23 volunteers, old and young. But we are especially grateful to John Garrigan who was a joy to work with and Peter Young without whom the job would have been so much more difficult and lengthy.

John Garrigan actually paid for everything in advance on his credit card and only gave Penny the receipts on the final Saturday. He has now been reimbursed for this, plus his fee and the day rate for his labourer. Peter Young has waived his costs. 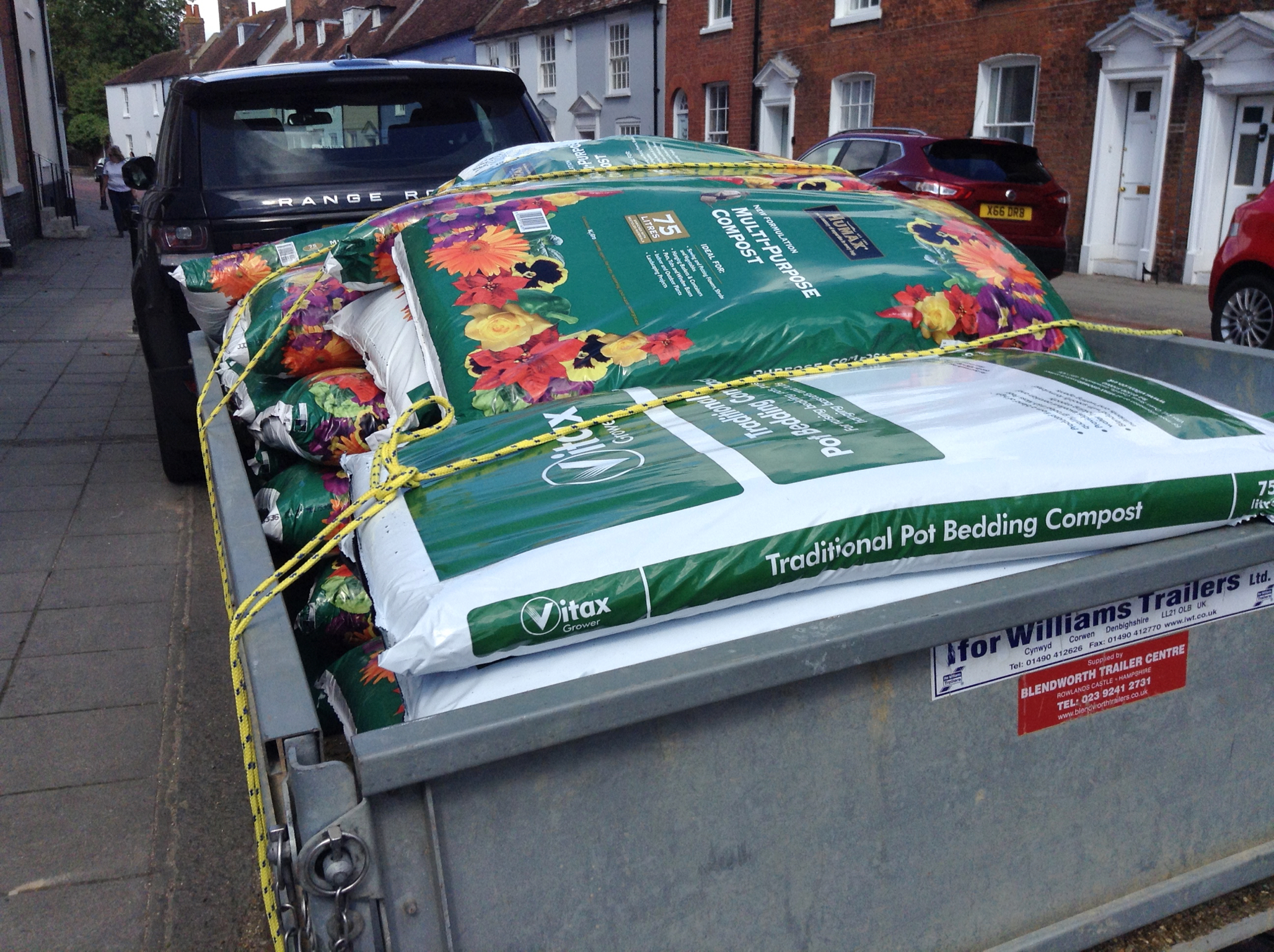 All plants and 96 huge bags of compost were delivered to the Young’s at no.15 before the Friday evening. They were then loaded straight on to Pete’s trailer to make for easy delivery to each planter on Saturday.

On the day itself

Penny assembled all the volunteers available with a timetable to make things run as smoothly as possible. The volunteers were on the whole women and the elderly, so not a lot of muscle. A general call went out for anyone who could spare just an hour at 10am on Saturday to help load the compost into the planters.

Sandy Young and Susan Brownfield organised all the refreshments. 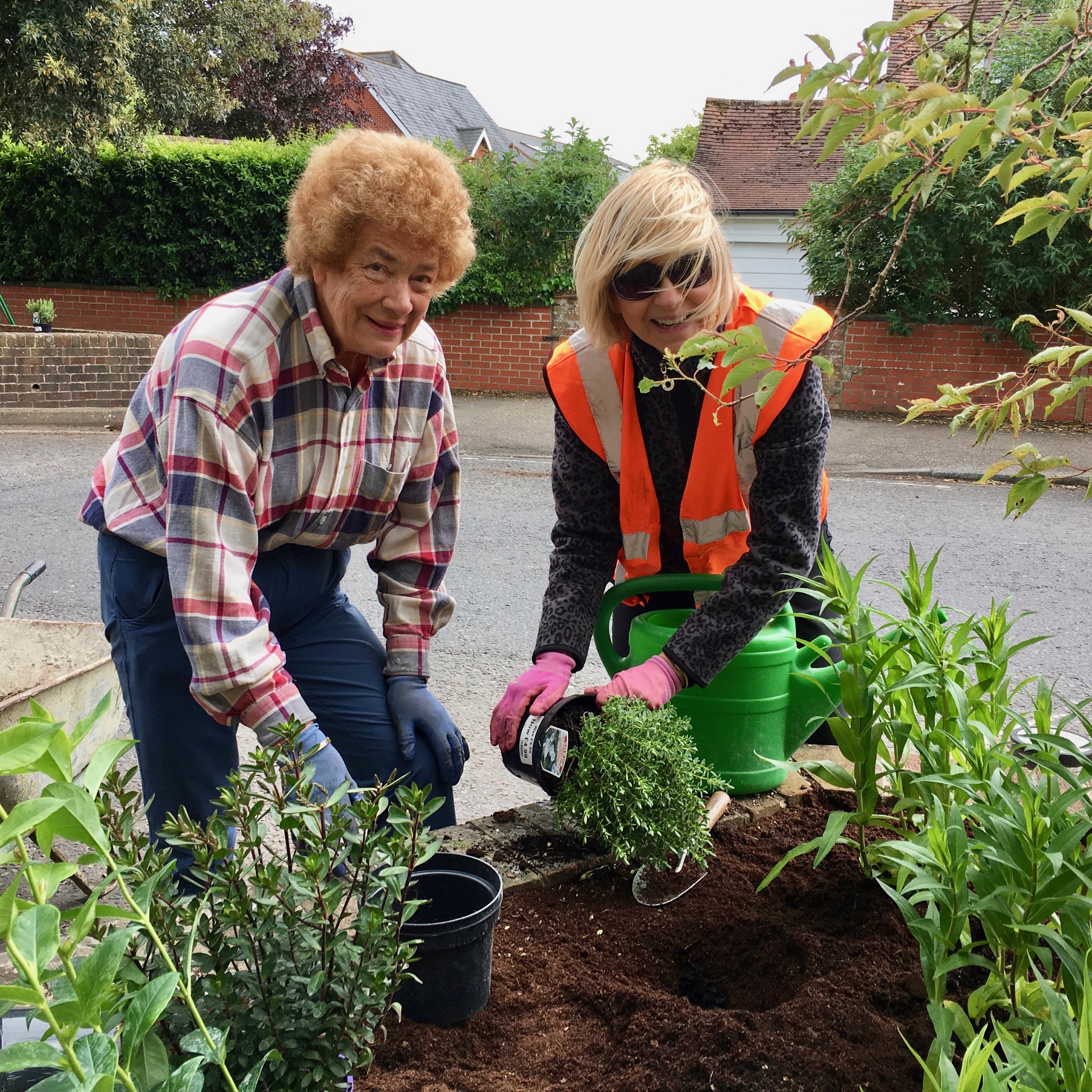 A triumph of community endeavour

The re-planting of Westgate Planters was a huge success and great fun. A big thank you, thank you to the person upstairs who arranged perfect weather!

A huge, huge thank you to all of those who helped make it such a success. The amount achieved was unbelievable and the end result is just fabulous.

Penny plans a thank you party for all those involved later this summer, with a celebration drink at number 11. A huge thank you and congrats to the planter team.

PS. Penny is still in possession of a small green watering can, a large shovel/spade and a trowel. Please claim then. 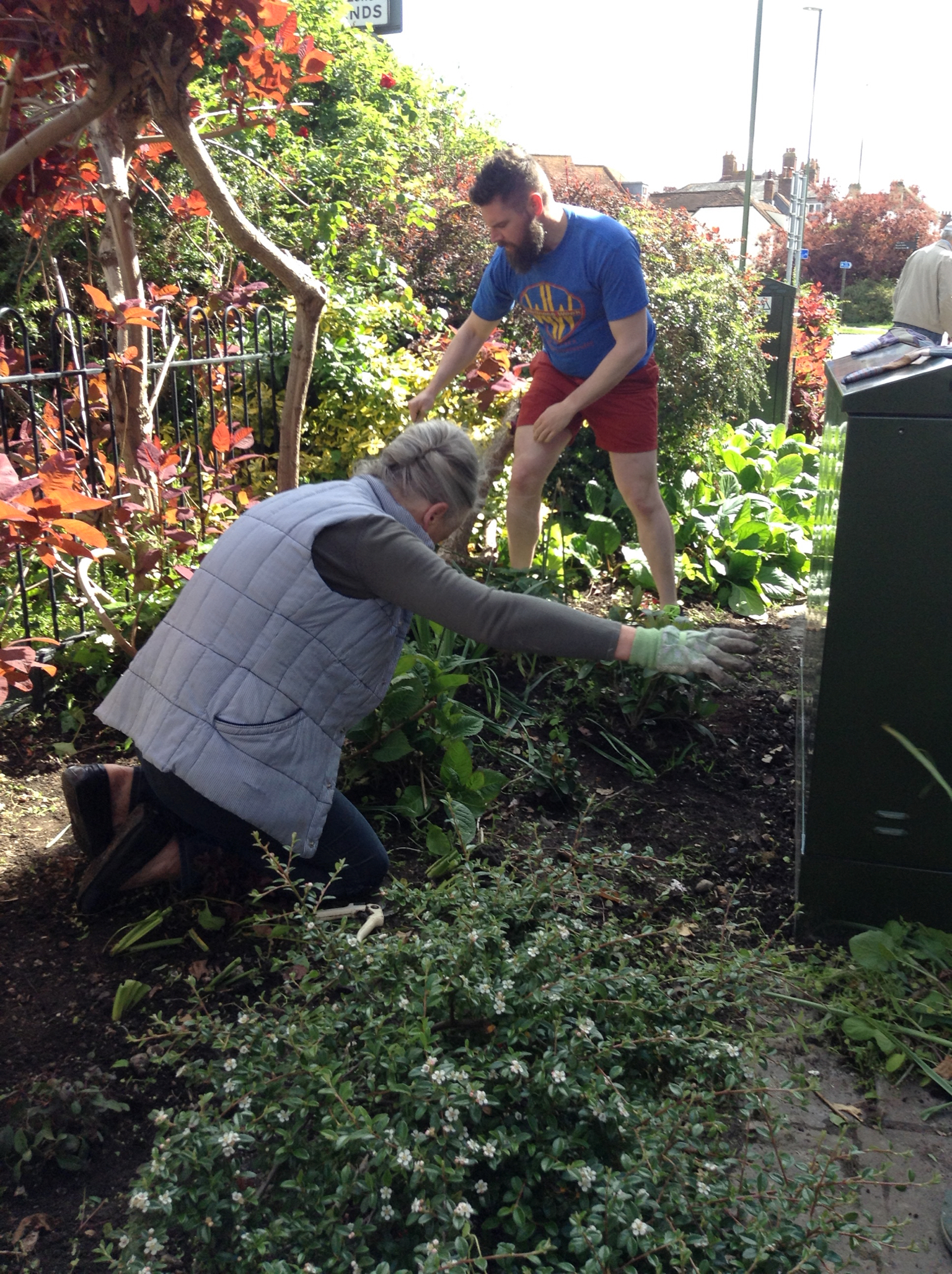 On time and within budget

The work came in well under budget by approx £200, this includes leaving £250 in the kitty for bulbs and replacement plants. However, Peter has waived the cost of his workmen and disposal of all debris leaving approx £700 in the kitty. Receipts and figures have been handed in to our Treasurer, Vince Waldron, for reimbursement. Peter Young has asked that this money be used for the further beautification of Westgate.

The most important thing is to keep all the planters watered. Not easy we know, but it would be such a shame to let all the good work go to waste.

There are one or two places where a plant is missing and John or Penny will come by and plant them up in the weeks following. There will also be bulbs for the spring which Penny will pass on to interested residents at the relevant time.

We are sorry that the planter outside The Crate & Apple has had to be abandoned part-stripped. On removing a third of the shrubs the volunteers discovered that the walls made from sections of logs had rotted and that it’s the shrubs which are holding the whole thing together.

The emptied end looks a bit of an eyesore which was remedied somewhat with a few plants on the final Saturday.  Penny has also written to Helen Monkton of City Council to inform her of the state of the planter itself.

There also appears to be a bees nest inside the remaining shrubbery. 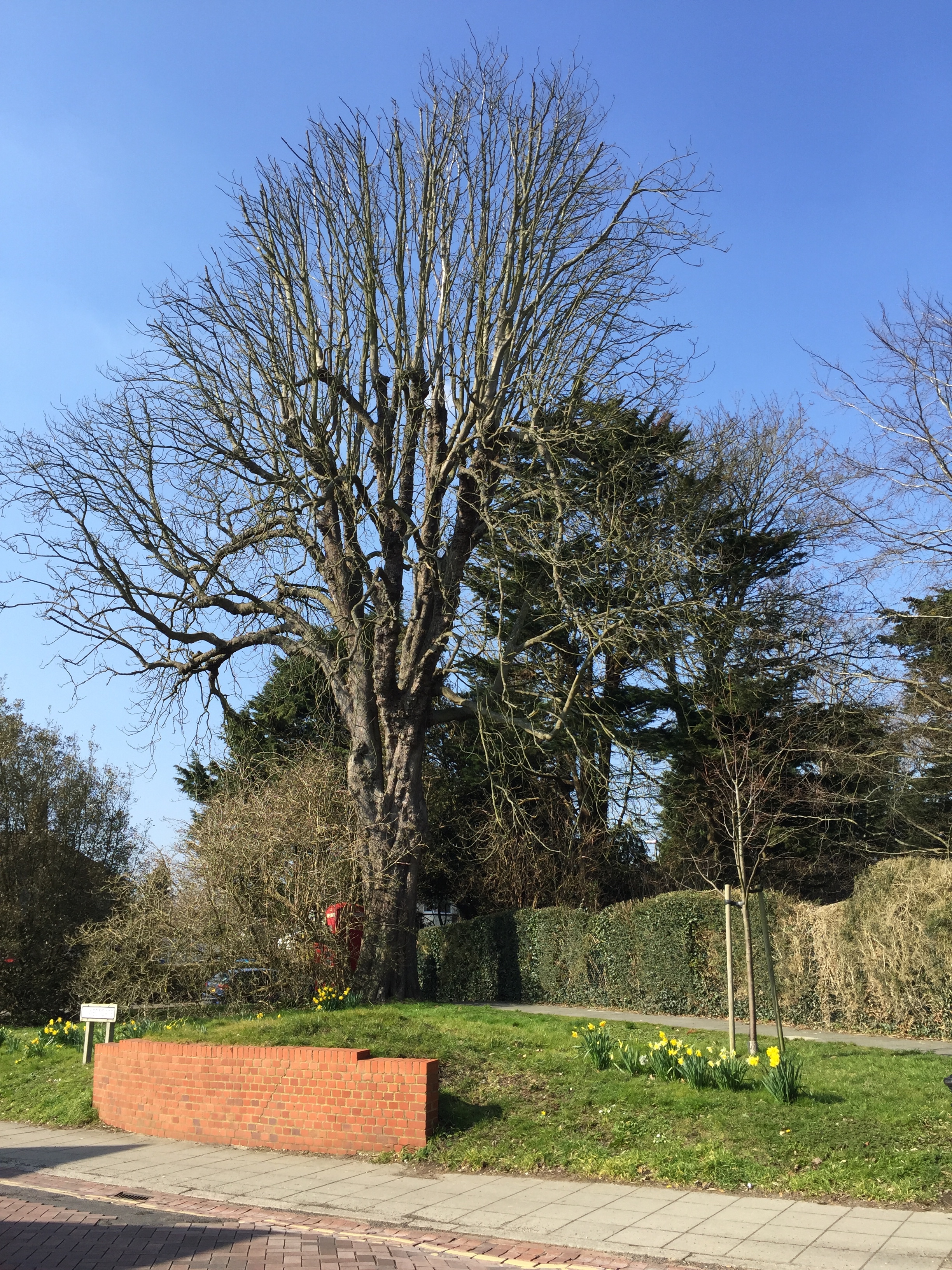 Penny has suggested the idea of turning the grassed area around the telephone box next to Parklands into a wild flower meadow, especially now the tree (seen above) has gone. There is something similar at the roundabout just after Emsworth and others know of another near Bognor. We are aware that this piece of land falls under the jurisdiction of Parklands RA but we hope they will feel it would be an idea to share our booty with them and suggest we join forces to achieve this. Given the relevant information, Penny is happy to take this further.

Alternatively we could suggest this for the roundabout at the top of Westgate. However as we know, this is to be altered in the near future as part of the Whitehouse Farm traffic calming measures.

Penny would welcome your thoughts.

And finally, to all drivers who use the street, the Residents’ Association now hopes that you will have an added reason for respecting the 20 mph speed limit as you drive slowly by to admire the state of our planters!