This article first appeared on 30 July 2016 as part of an occasional series of historical items that relate to Westgate and have been somehow Hidden from History. We are grateful to Westgate resident Rachel Moriarty for a host of new material which has resulted in this much expanded version (May 2017). 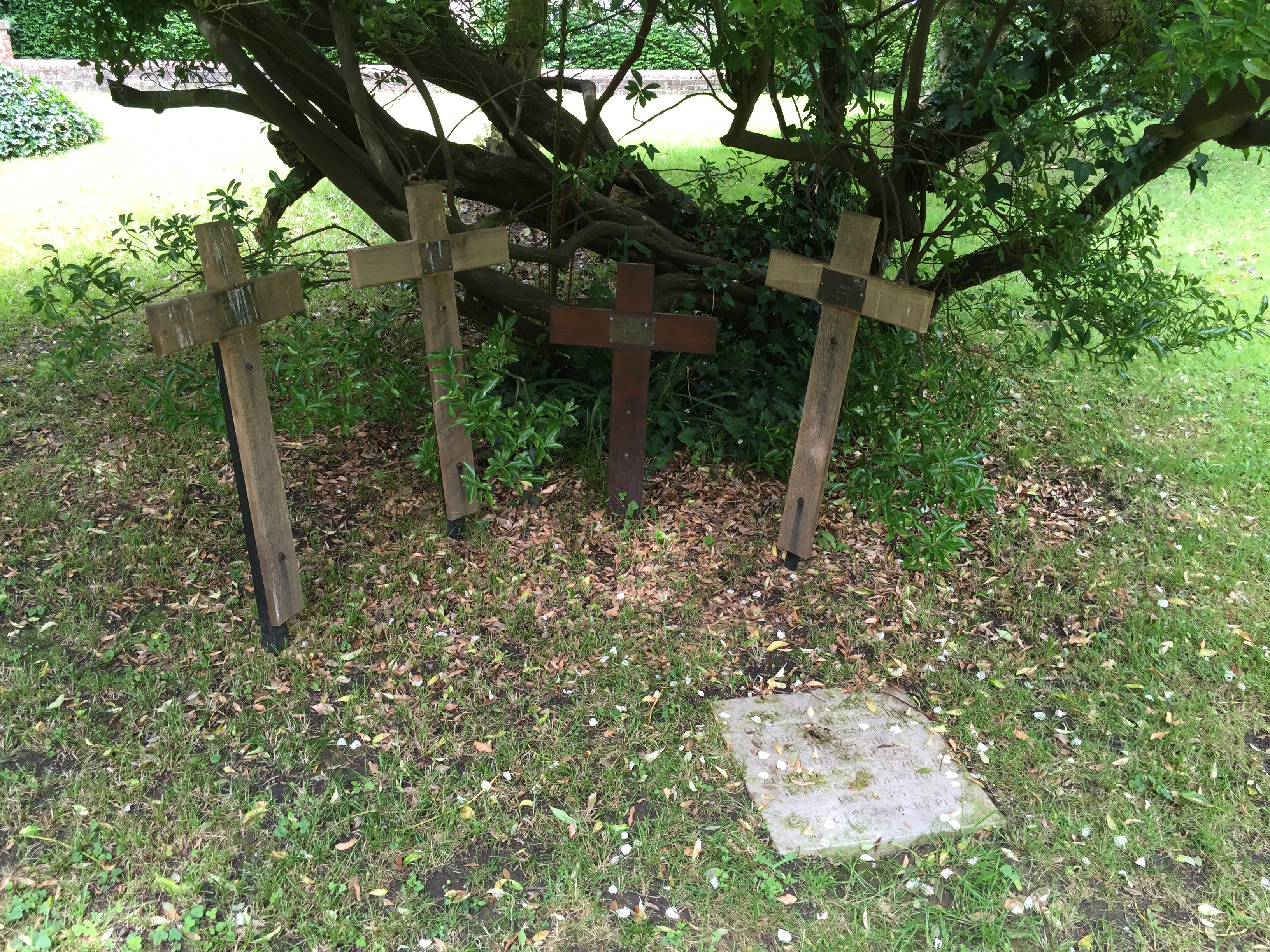 In the churchyard of St Bartholomew’s Church is a stone plaque and four wooden crosses (shown above), marking the graves of five sisters of the Community of the Servants of the Cross, whose last members spent their final years as residents of Marriott House and who died between 1999 and 2003 – one grave lacks its memorial cross. They belonged to a small community founded in the nineteenth century dedicated to nursing and caring for the aged and infirm, to peaceful prayer and to hospitality. Their story is documented in two sources, their own history, Surprised by Joy, written in 2004 by Sister Jane[1], and in notes and an article in the Chichester Cathedral Journal for 2008 by a former Chaplain to the community, the Revd Stephen Guise[2], and is noted in histories of religious orders of this period. What follows is drawn from these sources, as well as Rachel Moriarty’s own recollection, and she is very grateful to Fr Guise, now the priest in charge of Sidlesham parish, for more interesting information about his chaplaincy and the nuns.

The Community of the Servants of God

The nuns belonged to a community originally formed in 1877 from a convent (CSMV) founded in Wantage in 1848; in 1882, when new members offered themselves as nuns, it became in its own right The Community of the Servants of God. Its original aim was ‘to give working-class girls an opportunity to consecrate themselves to Christ, in a spirit of Reparation for their own sins, and those of the whole world’. [3] These nuns were recruited when the Wantage Sisters were working among girls ‘at risk’ in Fulham, and found that some of their clients wanted to join them in a religious community dedicated to nursing and caring for the aged and infirm. As the words suggest, these girls were not from the middle- and upper-class backgrounds of the Wantage nuns; many had been in service, and recalled being well-used to a disciplined life governed by bells. In 1895 the community moved to Worthing, where the sisters founded a convalescent home for children, and they lived in Sussex for the rest of the community’s life. Later they had substantial buildings, mainly for nursing and the care of the aged, first in Findon, and from 1967 in Lindfield. (Editor’s note: Lindfield is an ancient village to the north-east of Haywards Heath but there is absolutely no mention nor trace of the Order in any documentation published by the village authorities or history group that I can find. As far as Lindfield is concerned they never existed.)

The community thrived in the early twentieth century, with eighty nuns in the 1920s; in 1959, thirty sisters are still listed as belonging to the community. But from the mid-1980s things became more difficult, as the sisters grew older and the religious life was less appealing to new recruits; in 1997 the Mother Superior, Mother Doris, and their Warden, the Ven. Keith Hobbs, Archdeacon of Chichester, began to consider arrangements for their care beyond the convent. By this time Chichester Theological College had closed, and its buildings had been converted into a residential care home, Marriott House. There the sisters could be accommodated together, with St Bartholomew’s Church as their own chapel; local clergy, including Stephen Guise, acted as chaplains, and the Cathedral was near enough for them to attend on Sundays.

The memorial stone set in the grass of the churchyard refers to the existence of their Order for 150 years. Five sisters moved to Marriott House – Mother Angela and four sisters, Doris, Ruth, Jessica and Margaret; at first a few joined other regular communities in Wantage and Woking, but Sister Janet Mary and Sister Jane later joined the others in Chichester. The arrangement worked well, and the nuns were warmly welcomed; Marriott House was a base for their religious life together, and they in turn provided a spiritual core for the house. In 2004, when the community finally closed, two sisters survived, Mother Angela and Sister Jane; they both lived to see the opening of George Bell House in 2008 and are pictured in the Cathedral Journal of 2009 with the Archbishop of Canterbury, Rowan Williams.

We knew these five sisters who lived at Marriott House, and the Cathedral congregation enjoyed welcoming and supporting them. Michael and I sometimes took them for days out to visit the places where they had lived and worked. The Findon house had been demolished and on the site was a formidable estate of smart executive houses, which they could not recognise at all. Things were different at Lindfield, where they visited a former chaplain to the Community, Fr Lewis Hollowood, who was still living in a cottage on the site. He offered us all coffee, and we left the sisters there, and returned later to take them home after a day of nostalgic recollection and happy memories. These sisters had lived their adult lives in community, and we were greatly impressed by their readiness to adapt to a different life in a different world; they were an encouraging example to those of us who shared their new lives, and it is cheering to know that they are buried nearby.

The graves are of those who died during this period, and whose ashes were buried there by Fr Stephen Guise: Sister Ruth, Sister Jessica, Sister Janet Mary (who had moved to Woking), and Mother Doris; Sister Margaret died in 2003, and it is not clear why she has no cross, though Fr Stephen remembers burying all five.

Of the two sources I quote, Sister Jane wrote her History in 2004, with an account of events and memories from several of the sisters, and many photographs of their lives and the houses they lived in, from black and white illustrations to colour prints from their final years. Fr Stephen Guise, in the Cathedral Journal, wrote his Personal Reminiscence as George Bell House was being set up, largely through the community’s generous legacy to the Cathedral. In the various church communities of Chichester, and especially the Cathedral, there are still many beside ourselves who remember the nuns.

But their abiding legacy is a short distance from Westgate: it was this community, which had attracted considerable donations and legacies in its past, whose final bequest endowed the Cathedral house now known as 4 Canon Lane. Their legacy made possible the establishment of the former Archdeaconry as a Centre for Vocation, Education and Reconciliation, in memory of Bishop George Bell, who had been their Visitor and Bishop when they joined the order, and whom they greatly loved. It was opened by Archbishop Rowan Williams during an Anniversary Weekend in October 2008, which celebrated 900 years of the Cathedral and 50 since Bell’s death. George Bell’s name must continue to be honoured and remembered as part of the legacy of this community.

Notes from the Editor:

It is known that the bell, which still hangs to the side of the Church, was rung daily to call the Nuns to Vespers and that, to the delight of Westgate residents,  the Verger continued this tradition beyond 2002 until he himself retired. If any residents can confirm this I would be grateful.

The residuary body of the Theological College was and is still administered by the Bishop’s Palace and the final years of this religious order were administered by the Mother Agnes Trust until 2003, when the order died out with the death of Sister Margaret.

The Mother Agnes Trust still exists to promote the Christian religion through the advancement and promotion of theological training and education, the maintenance of a theological library and the relief of aged, sick or needy nuns who have been professed members of an Anglican Order – as in this case. The charity still has an income of £120,000 and spends £40,500 on its religious objectives. 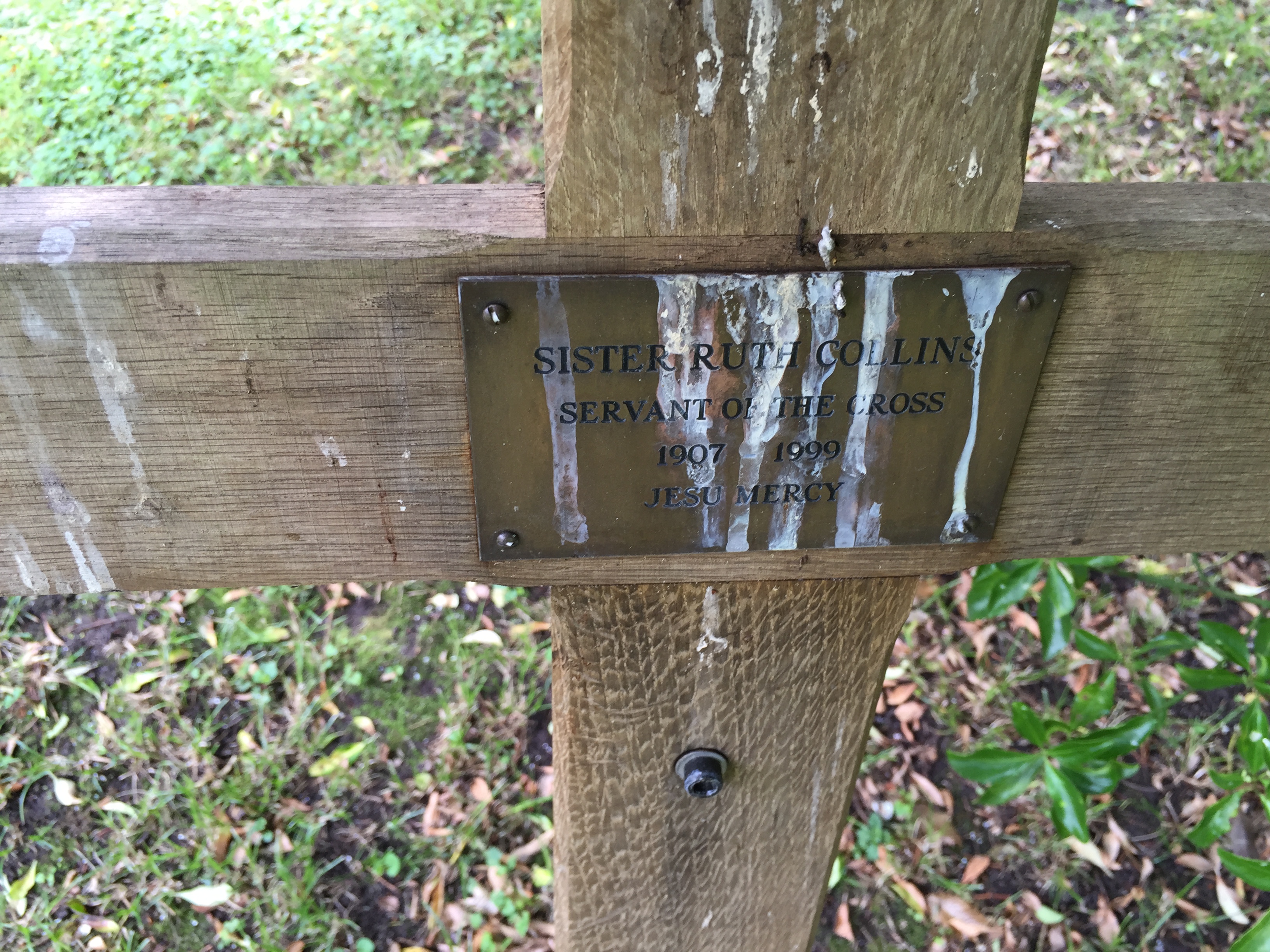 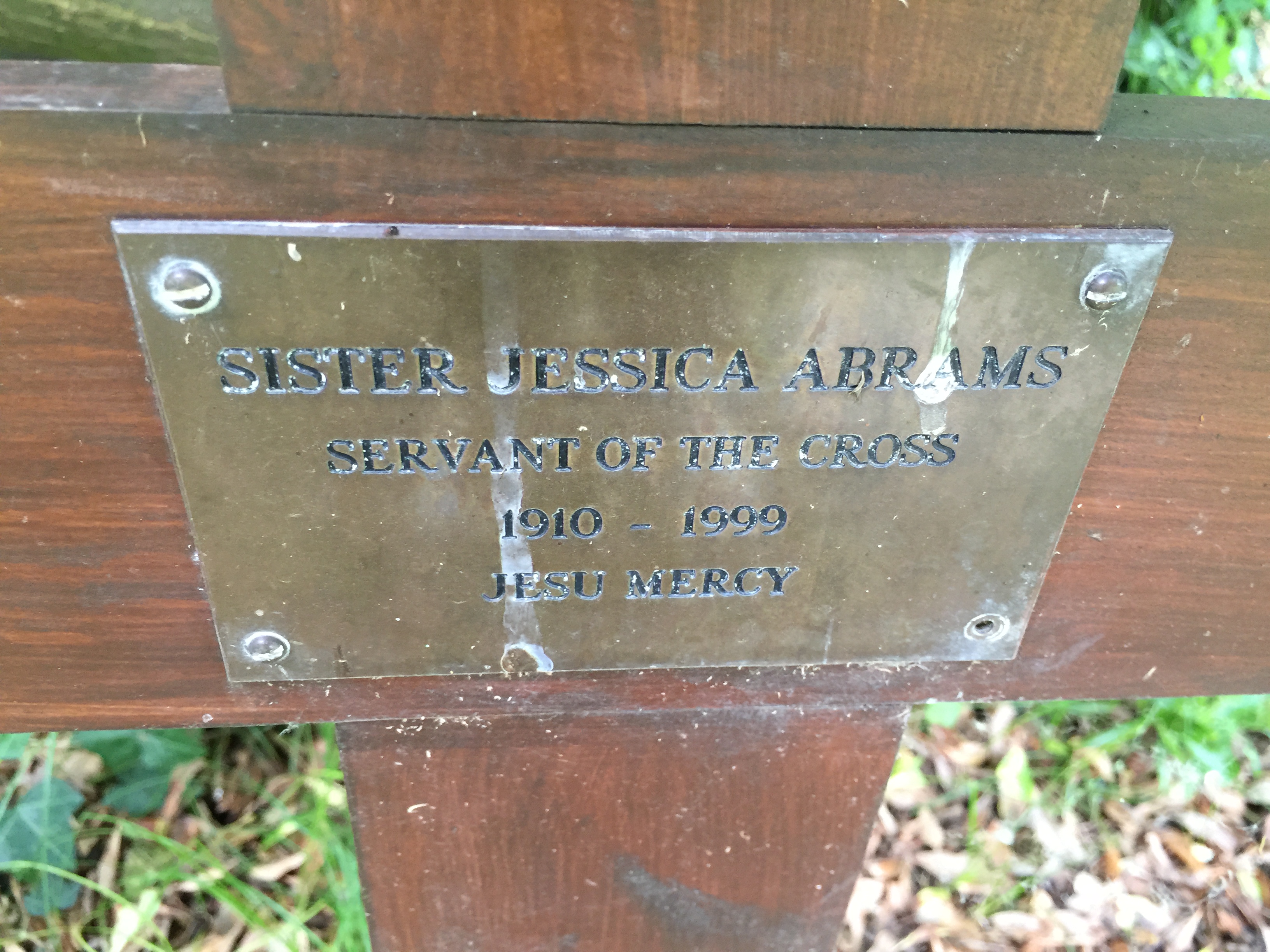 Sister Jessica Abrams followed in the February, aged 89. Interestingly, the public record shows that she was born on the 30th March 1909 so her memorial cross has the wrong birth year. 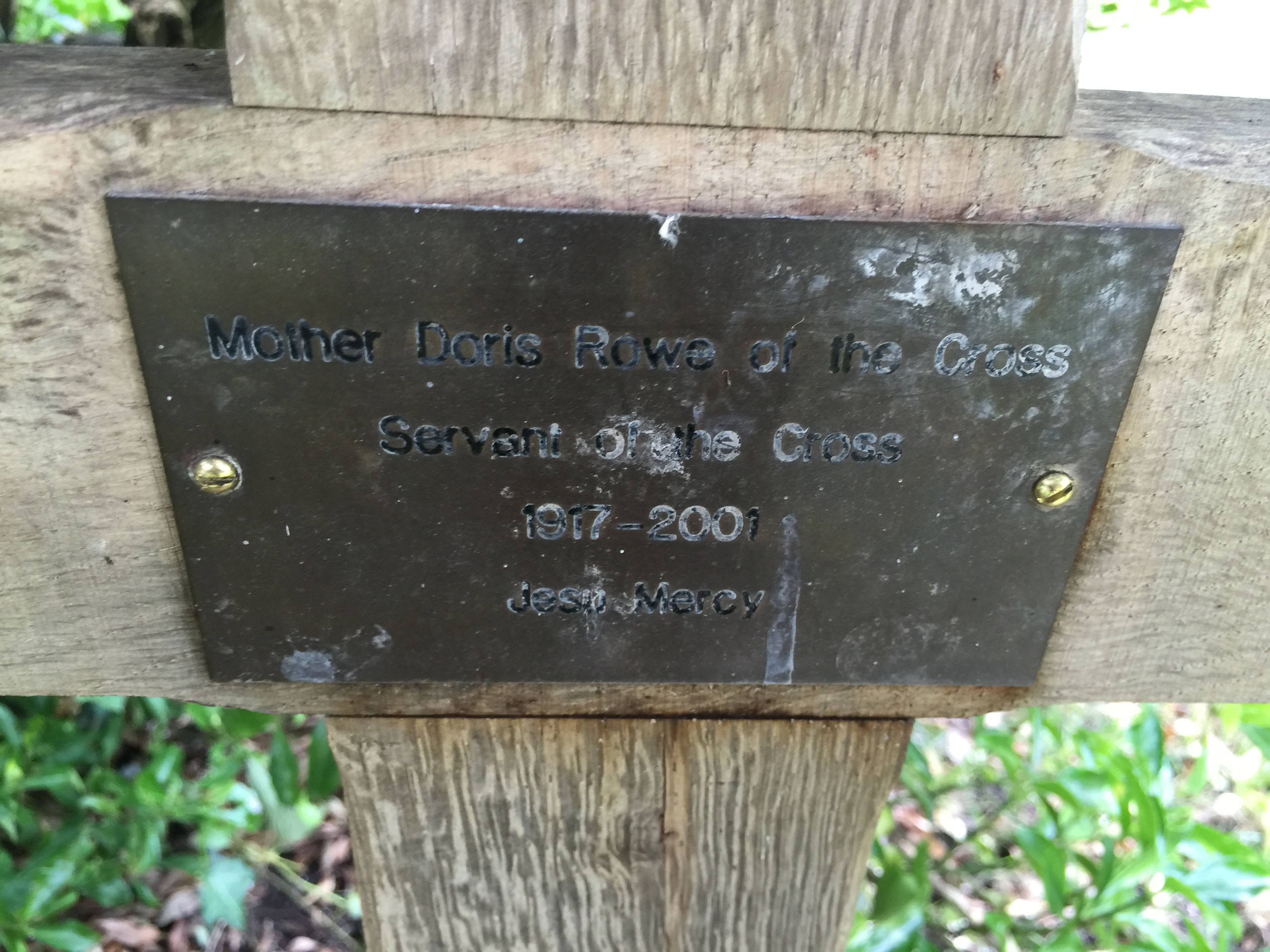 Almost to the end and as is usual, the Order did have a senior Nun in charge, in the person of Mother Doris Rowe. Doris Molly Rowe was born in Steyning on the 1st July 1917, during the First World War, and died in October 2001 at the age of 84. Her mother’s name might possibly have been Florence Rowe, née Long who got married in Brighton in June 1916. 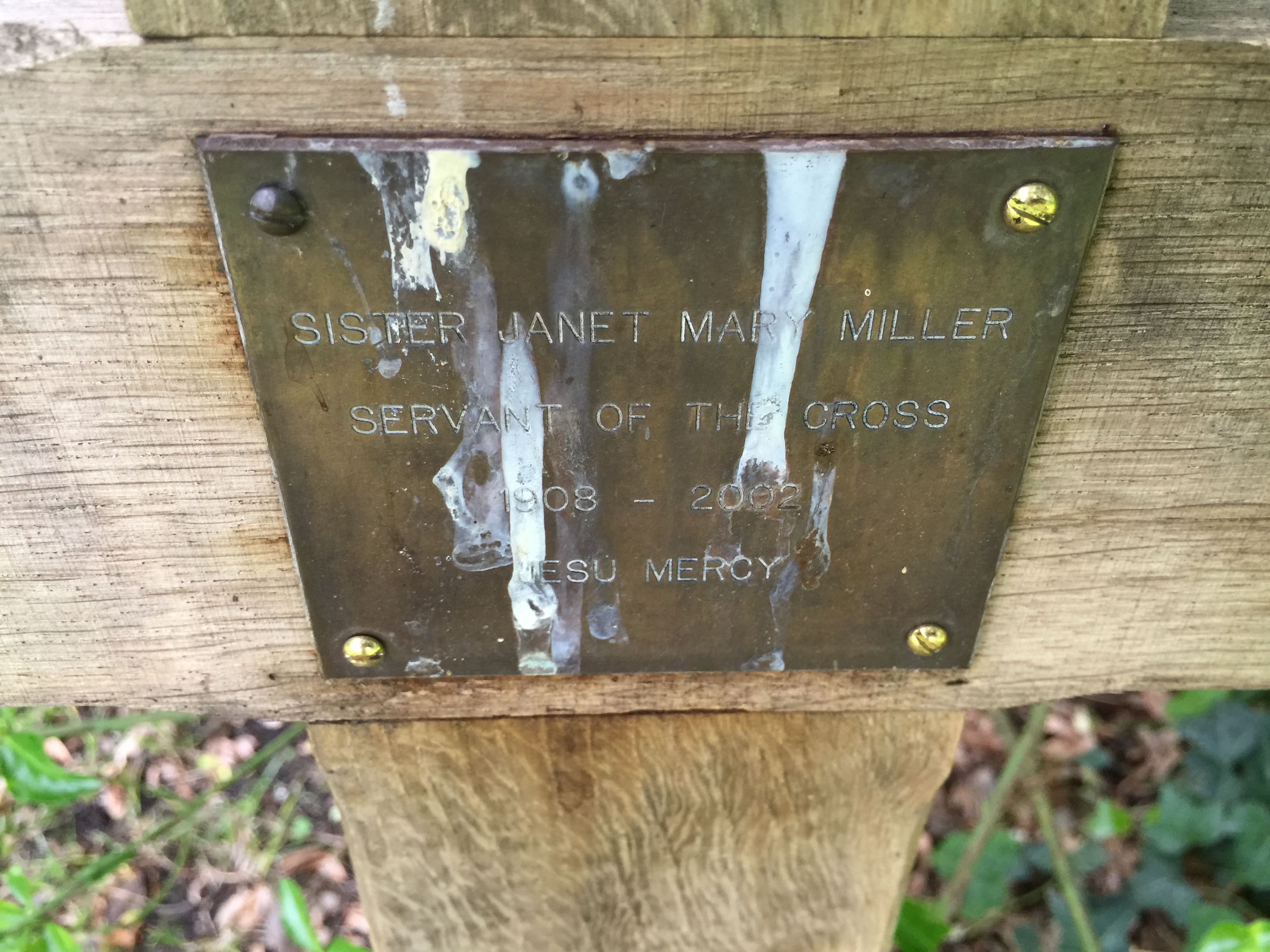 Sister Janet Mary Miller at the ripe old age of 94.

As mentioned above, the fifth Sister Margaret died in 2003, and it is not clear why she has no cross, though Fr Stephen remembers burying all five! Two other nuns survived the closure of the Order in 2004 (see above) but nothing is known of their last resting place. All three remain truly “hidden from history”.

We are grateful to Rachel Moriarty for completing the details of the lives of these women or their stories would have died with them. Their ashes lie in peace in the Churchyard of St Bartholomew’s, the sole reminder today of the self-effacing service of these five local women.

[3] This phrase is quoted without attribution in Surprised by Joy, p 4, but is presumably taken from a foundation document.

If any resident has any other information on this Hidden History, then do please contact us with what you know and we will update this article further. Many thanks!

Sister Doris Rowe I think was my Aunty Molly who was a Nun and I think Mother Superior – Sister Doris of the Holy Rood but I thought she came to the UK from New Zealand with the siblings: Eileen (my Nan), William, Gwen, Maureen. My mum was named after Aunty Molly she was called Doris Ruth. Is this correct?