By an amazing coincidence, the very week that the dray horses came back to the Brewery Field, if only for an afternoon, a resident was clearing the vegetation back in her garden when she discovered several items hanging on the wall.

The first one was this strange item: 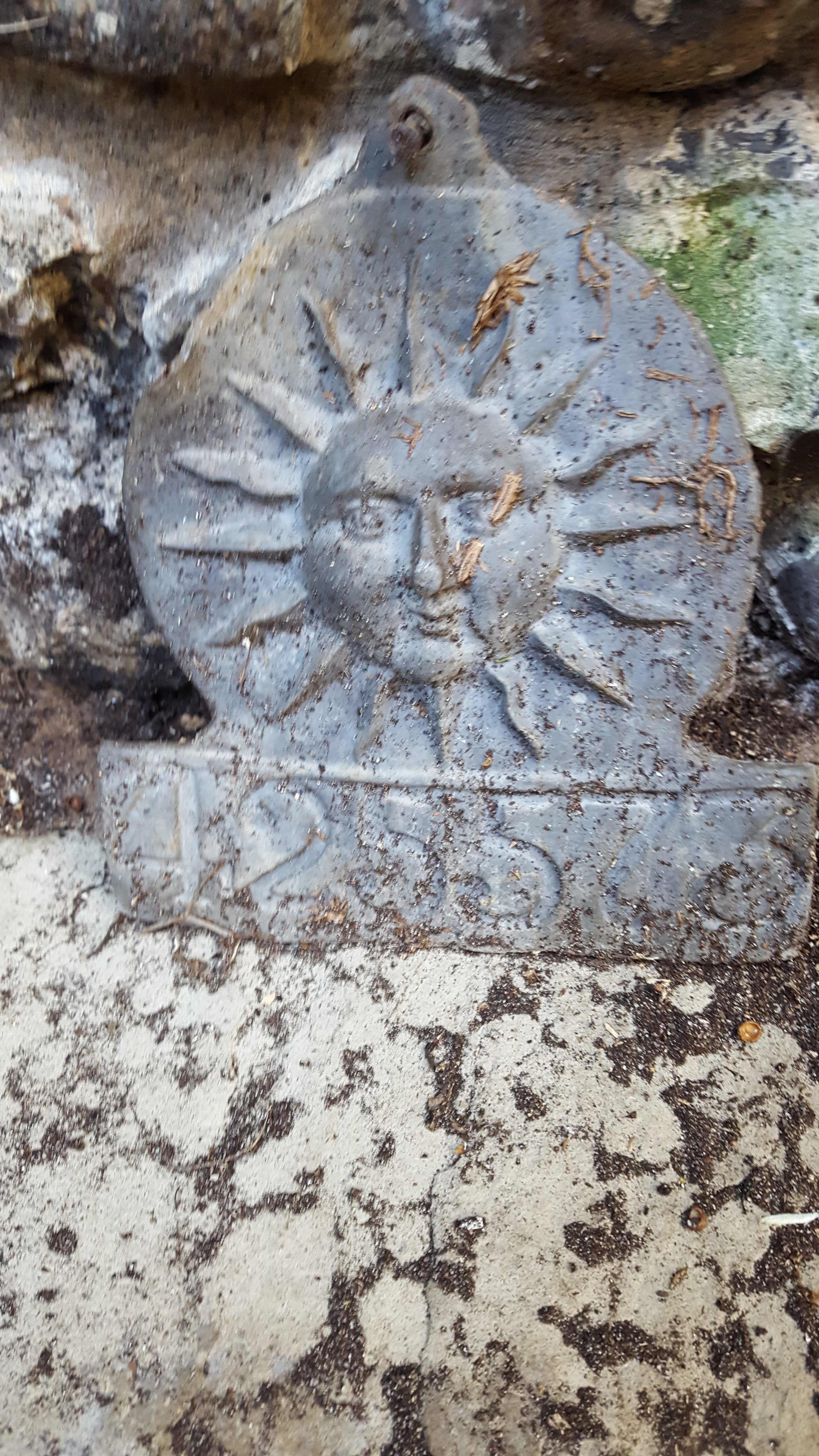 If you look up at the buildings in Chichester when walking around, you will in fact still find these metal plaques attached to the wall of the older buildings. They vary in design and this one is a sun with a number inscribed below, which looks like 125533 but maybe you can see better than me.

These metal plaques are known as Fire Insurance Marks. Fire Marks emerged after the Great Fire of London in 1666. By the early 18th Century, insurance companies were maintaining their own fire brigade to put out fires on the buildings that they insured. The metal plaques were cast in iron, lead or brass, or as here, pressed sheet metal embossed with the company’s logo. This one is from the Sun Fire Office who were the first company to use a mark on their insured buildings, established in 1710.

These identification plaques continued to be used into the nineteenth century with fire crews provided increasingly by voluntary bodies or parish councils as well as the insurance companies. The first municipal fire service was founded in Edinburgh following the fire of 1824 which destroyed much of the Old Town, followed by London in 1833. Outside of the capitals the responsibility for fire-fighting would not be taken over completely until the Local Government Act of 1894. So it is possible that this plaque has been here for some time although probably not before 1750.

The wall in the photograph is the dividing wall between the Shippam family house and the company’s stables. The company was started on Westgate in 1750 by butcher Shipston Shippam, an ex-sergeant in the 72nd Foot. His sausages were celebrated. It’s a safe bet that insurance policy 125533 at the Sun Fire Office belonged to Shippam’s on our street before it moved to its more industrial premises to start producing fish and meat pastes from the corner of East Street and East Walls in 1892.

But not without leaving something else behind, a shire horse brass, an old shoe and two horse bits. 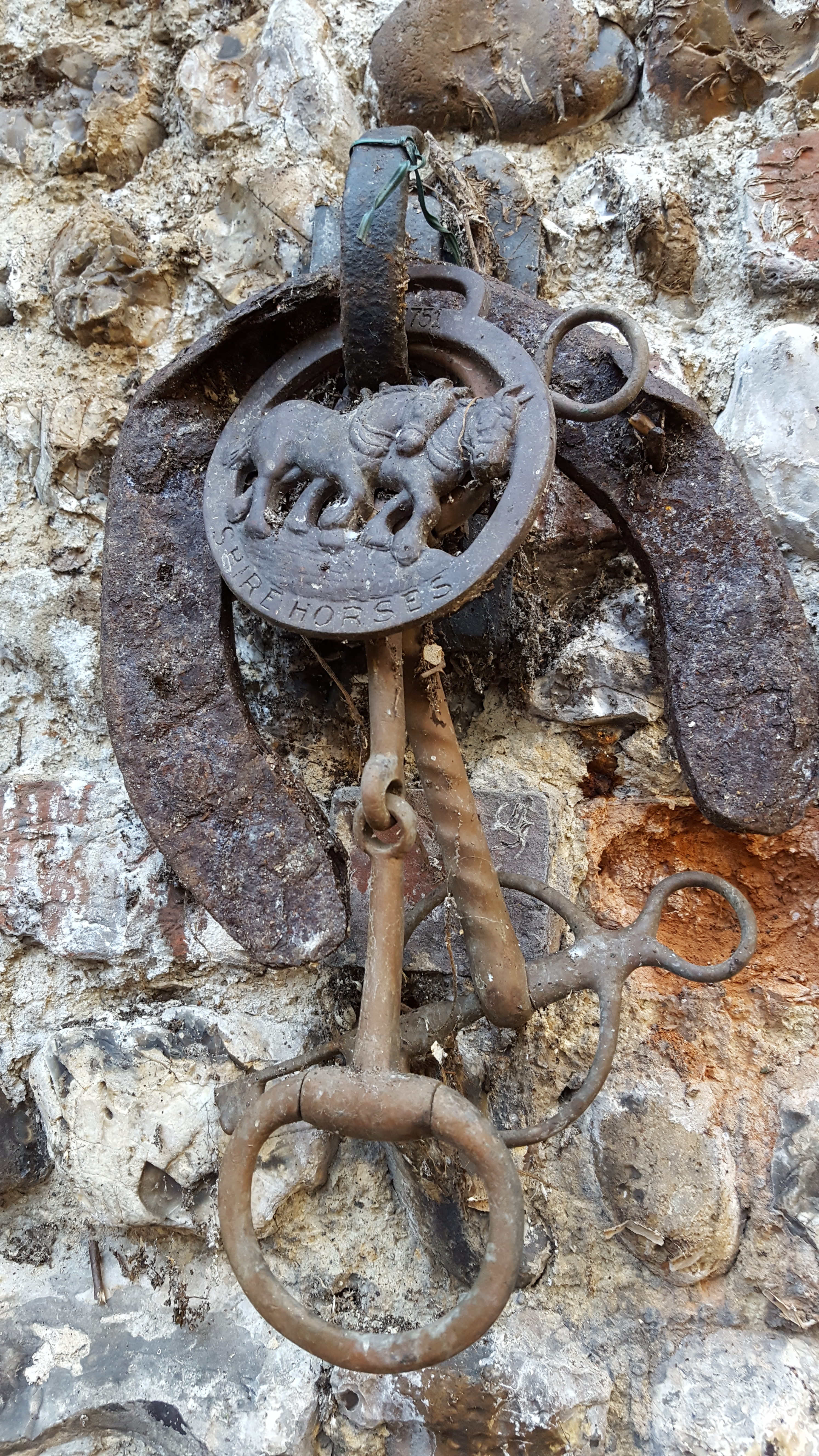 It is difficult to date this kind of object but we can hazard a guess that it would have been last used about the turn of the century. We know that the Henty Brewery replaced their dray delivery horses in 1912 with a steam lorry. Many horses were requisitioned for war service and the high number of deaths among service staff would probably have meant that the horse as industrial transport had had its day by 1918. Around this time a Shippam had married a Henty, could it be that the stables were shared in the last days of horse power? We may never know.

The photos contains two bits, an Eggbutt Snaffle to the front and a Liverpool Driving Bit behind. The Eggbutt Snaffle is one of many designs of snaffle. The fatter the mouthpiece the kinder the bit and some were made more flexible, broken by a single joint as here. This snaffle will not pinch the horse’s lips and is ideal for a sensitive horse. Even now it is seen as the most popular cheek across all brands and designs.

Here is a picture of a modern Liverpool driving bit, still popular and as worn by the shire horses attached to the dray in the Brewery Field this summer. 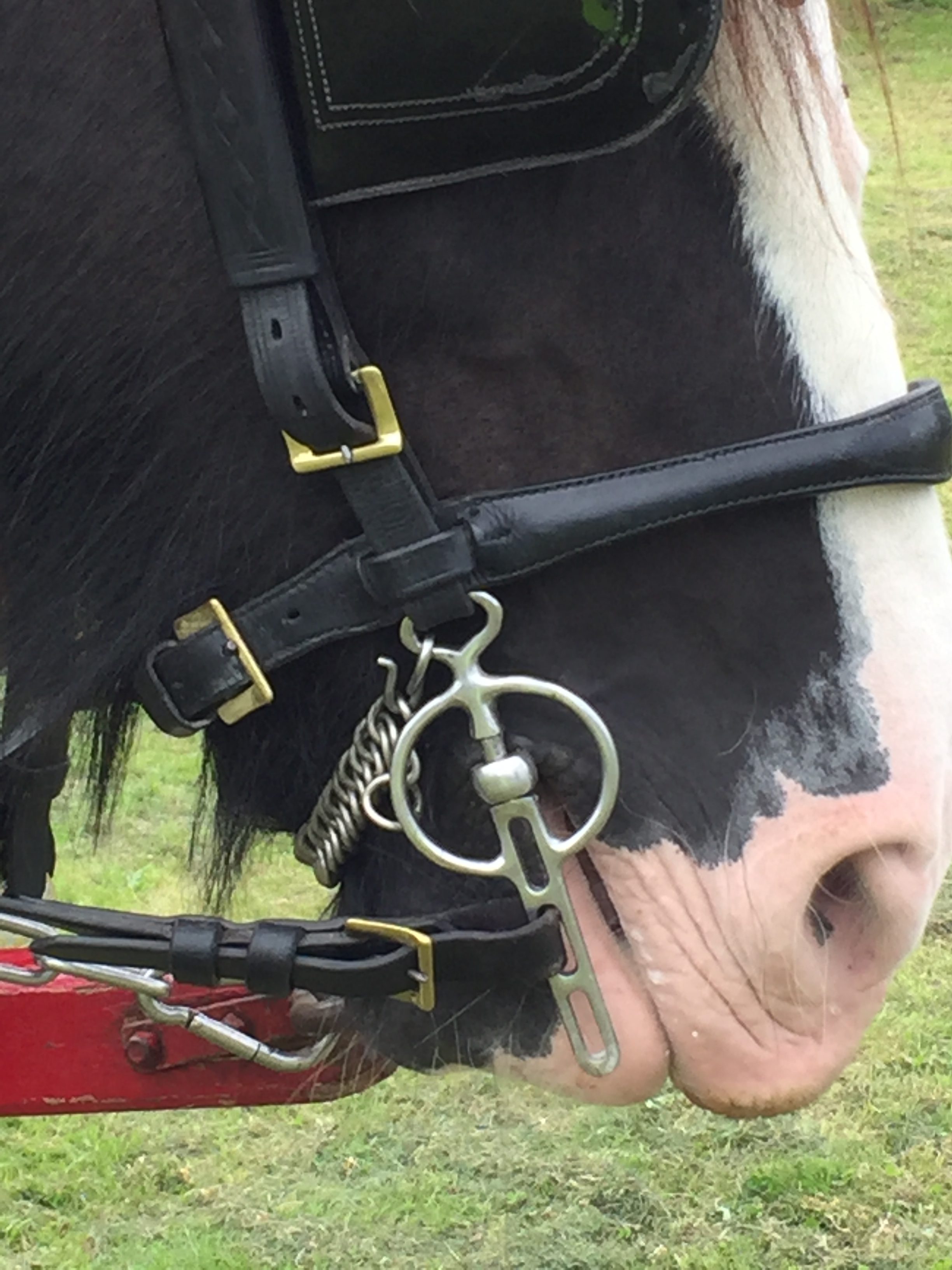 This is much kinder than the Liverpool Driving Bit in the previous photo, with its twisted design. But driving horses pulling weight is another matter than when riding horse. The slots in the lower half allowed for the reins to have a more severe control, as here.

For those interested in bridle design, other popular items were the Weymouth and the Bridoon. The top ring on the cheek pieces represents the Bridoon, and the lower ring on the cheek pieces, the Weymouth. The Weymouth had a curb and a tiny chinstrap, much as the chain is working under the horse’s chin in the bridle photographed above.  These designs were used together to allow two separate reins to be attached to the one mouthpiece in the horse’s mouth for better control and known then as the Pelham Bit. 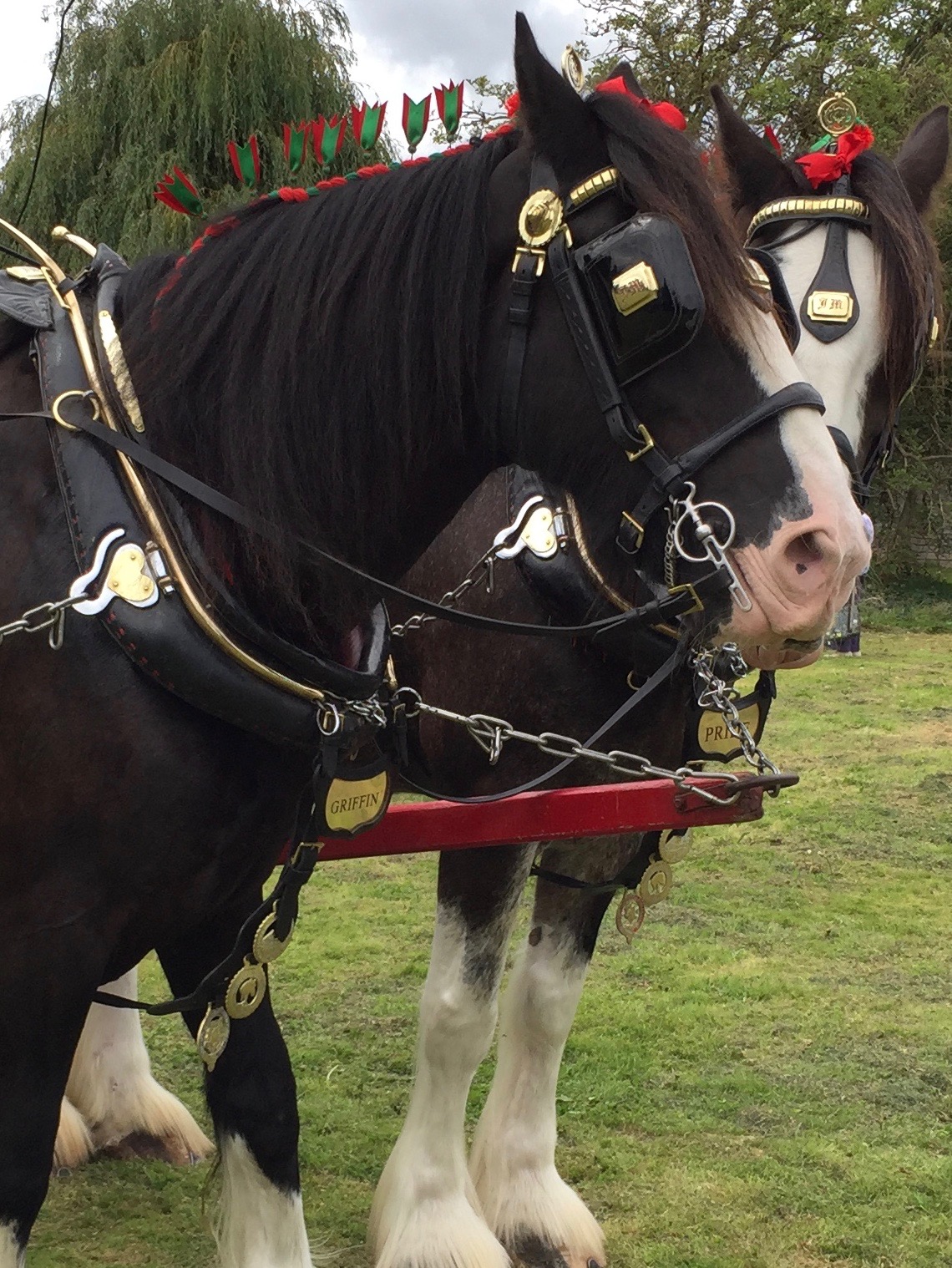 Finally the blackened horse brass will be a familiar object to many and several were usually attached to the martingales for extra decoration, as can be seen towards the bottom of this photo of Griffin, one of the Fullers’ dray horses from last Sunday.

We are very grateful to Anni Short for the photographs and to a neighbour for the information on the bridles.

After 105 years absence, it was an emotional moment to see a brewery dray enter the Brewery Field this Sunday as two magnificent shire horses, Pride and Griffin, were driven in by John Medhurst, their Read more…