With all the fuss being made about the Whitehouse Farm development, it is easy to forget the possible impacts of the proposed development of the Tannery site. Your committee is keeping its eye on this as part of its brief, with grateful thanks to committee member Brian Bird.

The Tannery was one of Chichester’s industries. It, together with the Brewery and the Shippam’s meat factory, must have made Westgate quite a smelly place. There is a picture on the internet of the Tannery in 1928 which we will be showing here soon, set in fields and with no houses to be seen.

Interestingly, to the south of the site is the long building which is the subject of the current planning application (see above). It is understood that this building was erected in about 1900. That office block is part of the estate owned by West Sussex County Council and it would seem that the building has been modernised over the years. Until July 2015 it was in use by County architects and surveyors, all of whom have been relocated to other WSCC premises.

This office block has the benefit of a Permitted Development Consent (CC/14/00506/P3JPA) obtained in 2014 for a change of use from offices to 12 x 2 bed and 3 x 1 bed flats. This consent expires on 31st May 2016. On the Westgate frontage to the site there is a house (65a Westgate) which was used as offices by the Trading Standards Department, who moved out more than a year ago. To the East of No 65 sits No 63 which is vacant but was formerly 4 residential units (63a to d). West of the site is Tannery Close, a development of houses and apartments carried out by Linden Homes in 2002 or thereabouts.

There is hard-standing for about 50 cars. The car park is in use, presumably by WSCC workers who walk currently to their office locations. There is a grassed area and some 30 mature trees, which form a pleasant visual amenity in the street.

Application 15/01590/FUL came before the Chichester District Council in January and was refused.

The application was for the erection of 11 dwellings, 5 in a terrace having a similar footprint to the office block, and three pairs of semi detached houses. It also covered the change of use of No 65 from offices to residential and the use of No 63a as a single dwellinghouse. A site plan (considerably amended from the original scheme) is shown here: 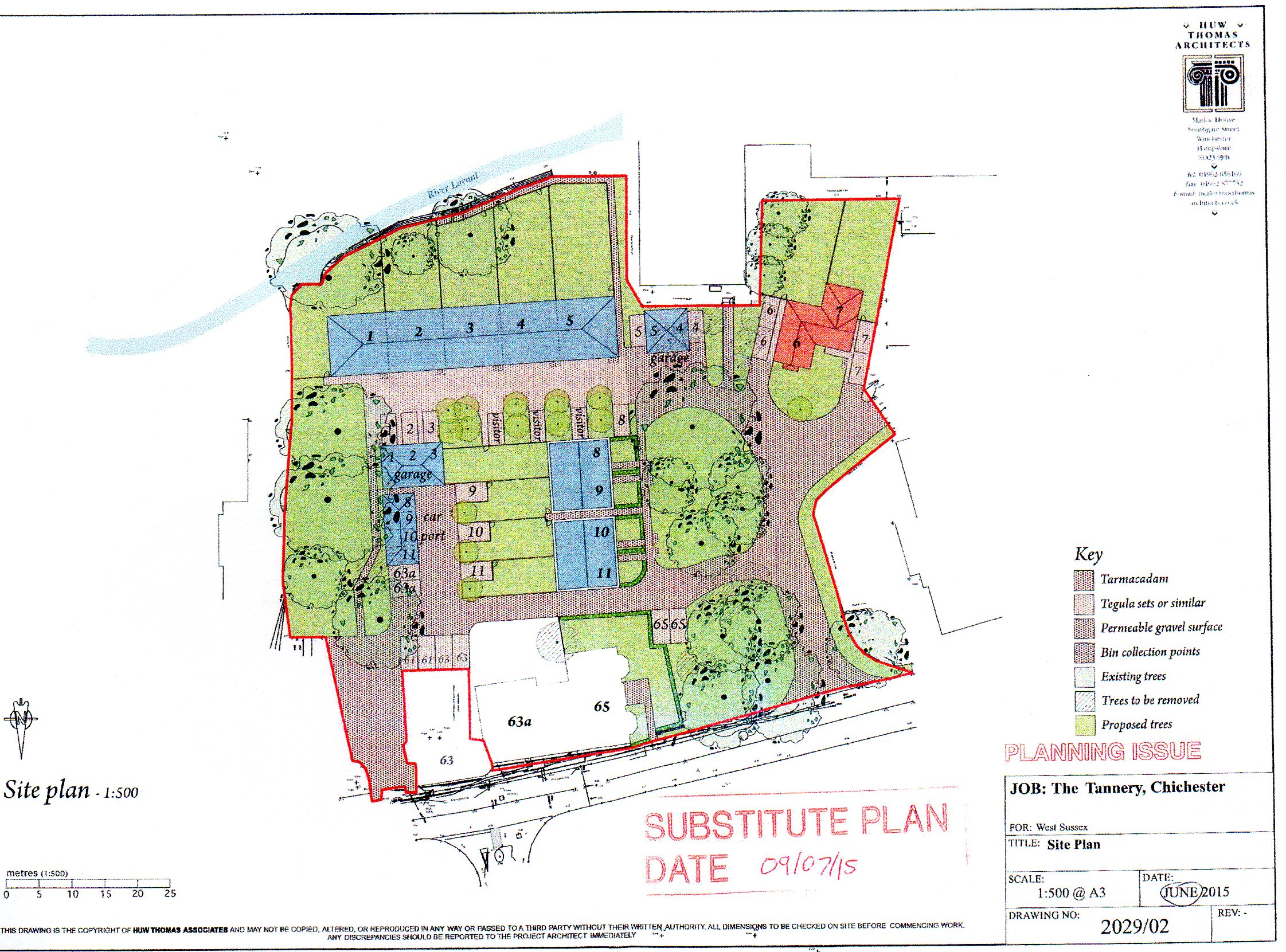 There was a very comprehensive traffic report prepared by consultants for West Sussex County Council. Generally it found no traffic objections to the proposed development. However it should be noted that the report refers to current conditions and not those that might apply after the development of White House Farm. This report is therefore worth reading in the context of WHF.

There was a substantive objection by Chichester District Council to the proposed change of use from offices to residential – the approved Local Plan (Para 6.9) seeks to safeguard the existing stock of employment sites and premises. This includes strong policy protection against the loss of existing land and premises to other uses where sites are well located and have a realistic prospect of re-use for employment purposes. The Economic Development Service of Chichester DC did not support the proposed development for the same reason.

For the developer to have overcome these strategic objections it was necessary to show that there is no demand for such office space. According to the Local Plan this will normally mean that real efforts are made to market the site over a period of 2 years “or a reasonable period based on the current economic climate”.

The question of sewerage had also to be addressed and the mix of housing was also discussed. Permission had been granted originally for 15 one and two bedroom flats (due to expire in May) but this proposal was heavily biassed towards larger units and reduced the proposed housing to less than 11. This is a cut-off point for planning as such a site is deemed unviable in terms of set targets for the provision of affordable housing.

The WSCC commissioned various expert reports on the state of the building and its value. It is claimed that the building needed refurbishment to provide 13,530 sq ft of modern offices at a cost of £1.5million. The estimated current value is said to be £900K or £1.25 million, taking into account the benefit of the Permitted Development Consent. Therefore it was claimed that an office scheme is not viable.

Agents, including Henry Adams, had been consulted and reported that there is no great demand for office space in Chichester. Henry Adams have an advertising board attached to the building and one at the front of the site at the back of the footpath. They are also listing the property on their website, suggesting that the building would be suitable as an headquarters office building.

Points for our consideration

The plan was refused permission at the CDC Planning Committee in December 2015 due to the potential loss to the City of 13,000 sq ft of office space in the former Tannery building and yet more at 65 Westgate. In addition, the heritage impacts had not been justified nor had the housing mix. Other obligations had not been met such as set standards for the efficient use of land, design detail and no formal commitment had been made to mitigate recreational disturbance, secure primary education contributions and public art provision.

So the boards are up seeking rental of the space for business use. If no one comes forward however, we reckon you should watch this space as WSCC will no doubt come back for a third try. The residents and the committee will be monitoring the situation as the site is beginning to show signs of neglect, there is a growing problem with litter and rogue parking in the now abandoned office car park is out of control.

Just in case you don’t know, but maintenance/”security” of the building is currently being performed by Camelot Europe, with 8 rooms being available to be lived in.