From time to time we bring in a guest writer to add to the content of our website. We are grateful to local historian Alan H. J. Green for his permission to reprint this article which originally appeared, entitled “The Westgate Brewery”, in the Sussex Industrial Archaeology Society Newsletter 137 of January 2008. And also to Paula Chatfield of Parklands RA who drew this article to our attention in the first place. If you would be interested in contributing something relevant to Westgate and its surrounding streets then do please contact us. 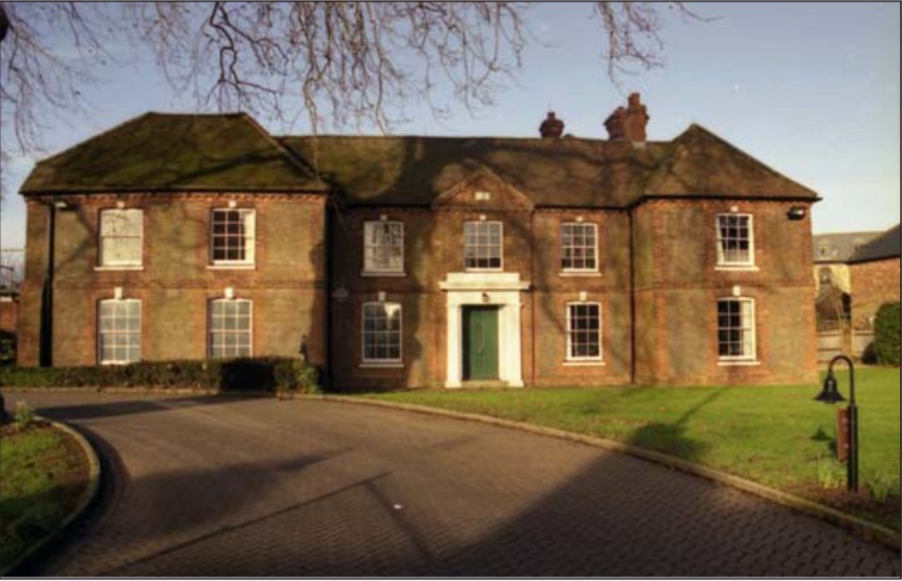 Fig 1 Westgate House in 2006. Its alarming asymmetry will be noticed.

Those approaching Chichester from the west, along what was once the turnpike road, pass a large, well-set-back Georgian house on the north side of Westgate, behind which looms what at first sight appears to be a range of malt houses. Known as Westgate House it is now used as offices, but has had a much more interesting past. In its pediment is a modern stone bearing the date ‘j75j’ replacing, with due classical allusion, the original that had weathered away, but unfortunately the house carries no record of its long association with brewing. Only the fake malthouses behind give a clue, but more about those later.

In the late 18th century the house, and its extensive grounds, became Chichester’s largest brewery and its early history is to be found at West Sussex Record Office in the famous Raper Uncatalogued Archive.* In this is an 85-page abstract of the title of Robert Henty to a moiety of the brewery and its tied houses1 which not only gives a history of the ownerships down to 1855, but also describes the brewery and lists the 50 Sussex inns and alehouses owned by the Henty family. No fewer than 16 of these inns were in Chichester.

The date of the founding of the brewery is not given in the abstract but John Dearling is recited as being the earliest owner. John Dearling was running another brewery at The Unicorn in Eastgate Square in 17842 and he leased the Westgate premises to William and Edward Humphry, two brothers who owned several inns in Chichester as well as another brewhouse at 22 West Street3. It was doubtless they who expanded the scale of the operation. George Loader’s 1812 Chichester survey shows that, by then, the brewery had already reached the size indicated on the detailed 1846 plan given as Fig 2 below.

When John Dearling died in 1804 he left all his worldly goods, including the brewing empire, to his son William. William was a colourful character and something of a Georgian Arthur Daley, who rose swiftly from brewer’s son to property tycoon. In 1811, to reflect his status, he had a large country house designed and built for himself at Funtington by James Elmes. The building of this house was the beginning of his financial ruin for he had overstretched himself and was running up monumental debts. This fiscal difficulty was doubtless instrumental in his selling of the lease of the Westgate Brewery to the Humphrys in 1814. In 1818 William Dearling fled the country to live in France, leaving his affairs in the hands of a trust charged with selling his estate in order to pay off the creditors. His debts amounted to some £88,0004 which would be a not-inconsiderable sum today, as it is the equivalent of £5.4M at current[2008] price levels!

One of the Chichester hostelries owned by the Humphry brothers was The Swan, a large coaching inn in East Street not far from the Cross, which was destroyed by fire in 1819. It was quickly rebuilt and what was described as a “rearing feast” was held at Westgate Brewery to celebrate The Swan’s rise from the ashes. At the feast 600 guests were entertained in what a contemporary account described as “the Guest Shed adjoining the Cellar and accompting [sic] house”5. This shed can be clearly identified on the plan in Fig 2. 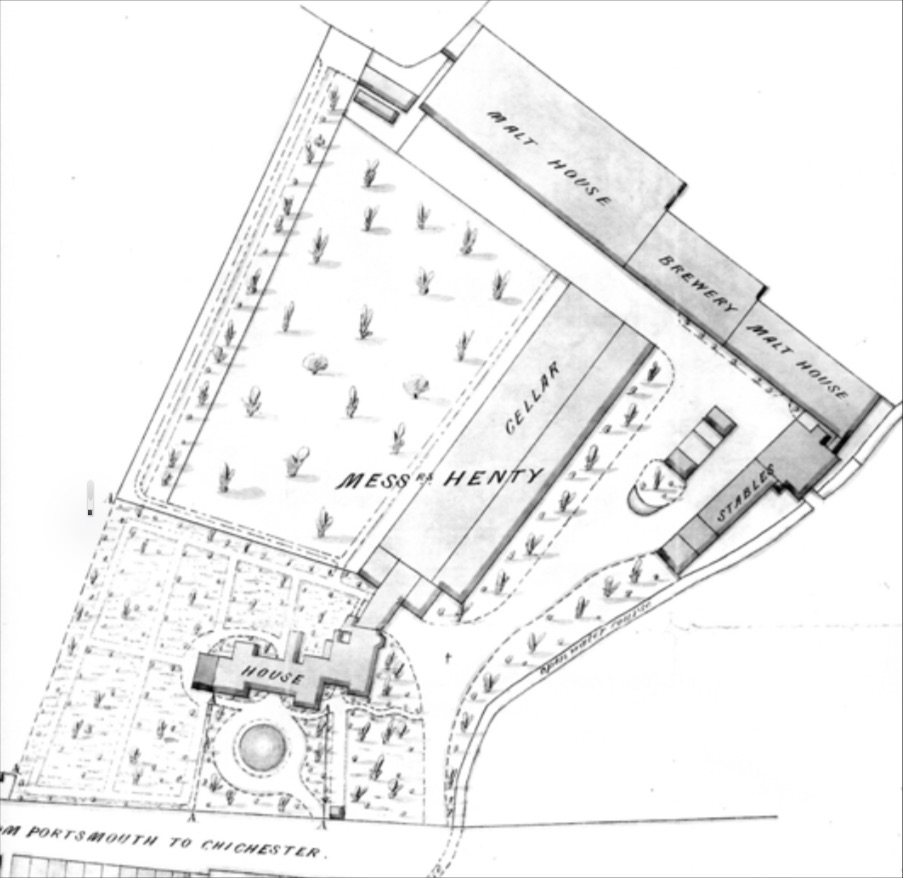 Fig 2 A plan of the Westgate Brewery drawn up in 1846 (WSRO AddMS 10842). The left hand addition to the frontage of the house is clearly marked, as is the course of the River Lavant which provided the Brewery with its water.

In 1827 the Humphry brothers sold their brewing estate to George Henty for the sum of £82,500 of which £17,514 represented the value of the brewery and its stock-in-trade, and the remainder the 50 inns and alehouses6. The nature of the Westgate site and the brewery at that time is given in Schedule 1 of the abstract as follows:

All that and those Messuages, Tenements and Dwelling House, Brewhouse, Malthouses, Malt Kilns, Warehouse, Stockhouses, Granaries, Stalls, Coach-houses, Woodhouses Orchards and Gardens….. commonly known by the name of Westgate House and Brewery.

It also recites that the “utensils” included a steam engine.

George Henty ran the brewery with his sons George and Robert, and when he died on 19th August 1829 he left the business to the two sons who in 1855, the date of the abstract, were running it as a partnership. 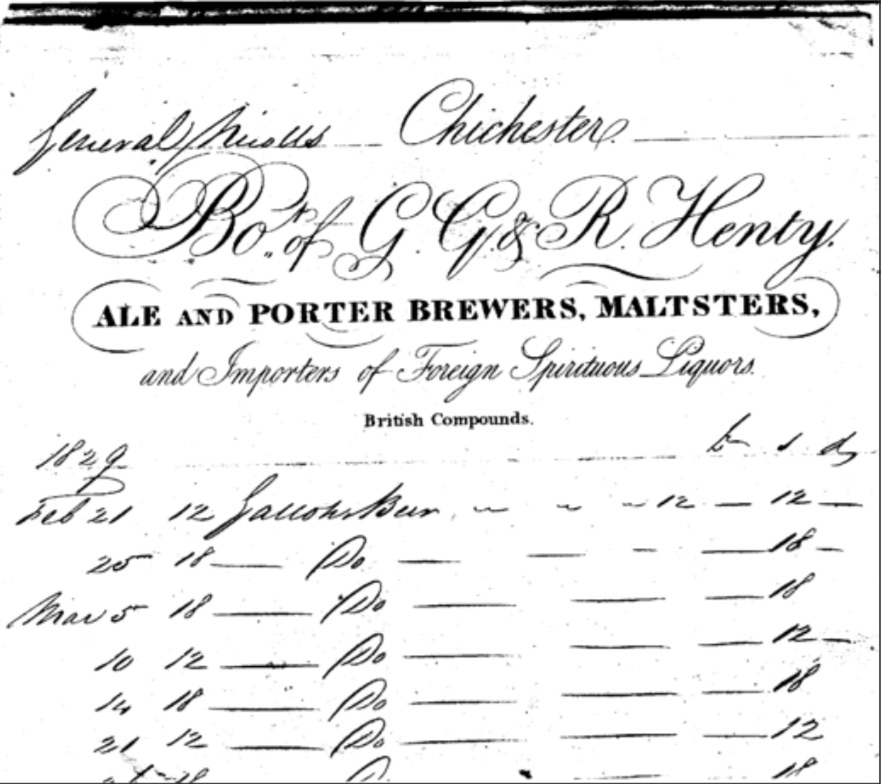 The brewery suffered a serious fire in 1865 but was rebuilt and the business became known as George Henty and Son in 1874. In 1921 it was amalgamated with the Arundel business of George Constable to become Henty and Constable7 and it is by this name that Cicestrians remember the Westgate Brewery. Many of their stoneware bottles have survived and your author is in the possession of one such.

Westgate House was sold around this time to Chichester Theological College who extended it on its west side in 19278. It remained in ecclesiastical use until 1945 when it was sold and from then on all operations were concentrated at 3 Westgate until the college closed in 1994.

In 1955, brewing ceased at Westgate but the site was used by Friary Meux (who had acquired Henty and Constable) as a distribution depot, with some of the former buildings being let to other businesses. In December 1979, the brewery buildings were again destroyed by fire – a particularly spectacular one this time – but fortunately Westgate House itself was saved. The tottering remains of the brewery buildings were demolished and the site redeveloped; behind Westgate House offices were built in the form of the fake – and rather out-of-scale – malthouses we see today, whilst to the east a small housing estate was created.

The roads in the housing development are known as The Maltings and Henty Gardens which appellations at least serve as tokens of past activities, but how wistfully one longs for the heady aroma of roasting malt to waft along Westgate!

More on the Brewery

* See Sussex Industrial History 37, page 19, for a description of this abundant archive. Called Oakwood it is still there but now occupied by Oakwood School.

Do you have any photographs of the Railway Tavern Nyewood Nr. Rogate, West Sussex.